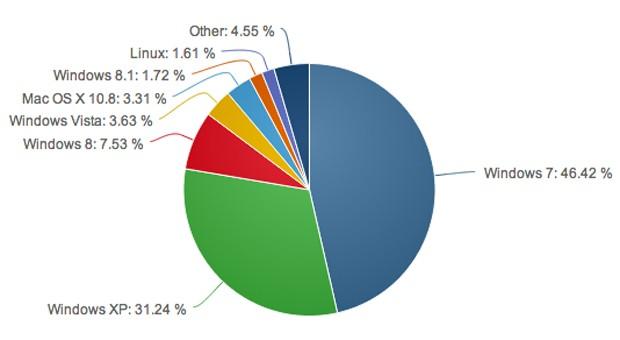 Web traffic doesn't directly translate to market share, but it's handy for tracking the adoption of brand new operating systems -- take Windows 8.1, for example. Net Applications notes that Microsoft's new OS nearly doubled in web share upon its official launch in October, climbing to 1.7 percent. Clearly, a lot of web surfers had been waiting to upgrade. As you might imagine, though, the software took share from its predecessor as customers either replaced PCs or downloaded the free update. Windows 8 declined for the first time ever, falling half a point to 7.5 percent; the two 8.x revisions gained 0.4 points when put together, but Windows as a whole dipped slightly to 90.7 percent.

Redmond wasn't the only one releasing a new platform, of course. Apple's OS X Mavericks accounted for more than 0.8 percent of web traffic last month, or enough to put it past Tiger and Leopard almost overnight. While the overall Mac platform only grew by a tiny amount to hit 7.7 percent of web use, we doubt that the crew at 1 Infinite Loop is complaining. It's not clear how the dueling Apple and Microsoft upgrades will compare in the long run, but you can check the historical trends both after the break and at the source link.

In this article: apple, browser, marketshare, mavericks, microsoft, NetApplications, windows, windows8, windows8.1
All products recommended by Engadget are selected by our editorial team, independent of our parent company. Some of our stories include affiliate links. If you buy something through one of these links, we may earn an affiliate commission.