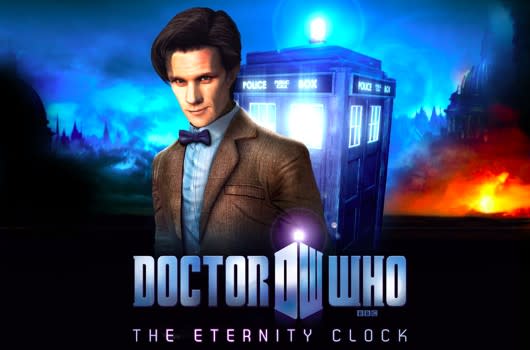 A planned trilogy of games based on the long-running British sci-fi drama Doctor Who has been cut short, as the British Broadcasting Corporation confirmed with Polygon that two sequels for Supermassive Games' adventure game Doctor Who: The Eternity Clock have been canceled.

Developed in a licensing partnership with the BBC, The Eternity Clock premiered for the PlayStation 3, PS Vita, and PC platforms last year to a largely negative critical reception. Speaking to Polygon, the BBC's vice president of digital entertainment and games Paul Joffe noted that while the corporation's relationship with Supermassive "was and continues to be good," no further partnership projects are planned following next week's release of the PlayStation Move educational game Wonderbook: Walking with Dinosaurs.

Supermassive Games' current project is Until Dawn, a "teen horror movie"-styled game for the PlayStation Move.
In this article: cancellation, doctor-who-the-eternity-clock, pc, playstation, playstation-vita, ps3, supermassive-games, vita
All products recommended by Engadget are selected by our editorial team, independent of our parent company. Some of our stories include affiliate links. If you buy something through one of these links, we may earn an affiliate commission.