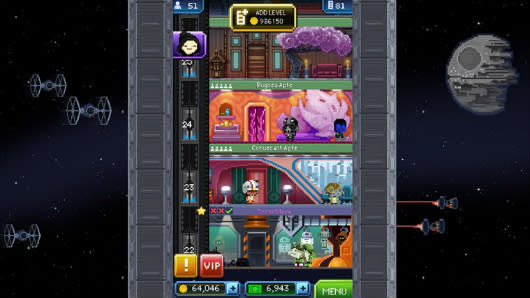 That's no tiny moon – it's a Tiny Death Star, the first Star Wars game from Disney since it bought LucasArts in 2012, made in collaboration with Tiny Tower developer NimbleBit. Tiny Death Star is a pixelated Star Wars take on Tiny Tower, with players building their own Death Stars for the dark side of the Force. It's available now, free, for iOS, Android, Windows Phone and Windows 8.

Disney shut down LucasArts as a development studio in April, shifting it to the licensing business. NimbleBit has made its mark in mobile development in recent years, with more than 10 million downloads of Tiny Tower as of 2012. But no matter how you may feel about Disney, LucasArts, Star Wars or NimbleBit, it's clear that Tiny Death Star is pretty darn adorable.
Show full PR text
From a Tiny Galaxy Far, Far Away Comes "Star WarsTM: Tiny Death StarTM"
Disney Interactive, in collaboration with LucasArts and Tiny Tower creators NimbleBit, launches a new 8-bit builder game for iOS, Android and Windows Devices
In a galaxy far, far away, the Emperor is building the ultimate power in the universe level by level, and he needs help. In partnership with LucasArts and NimbleBit, the makers of Tiny Tower, Disney Interactive brings a whole new mobile game where fans build a Death Star their own way in Star Wars™: Tiny Death Star™.
Players live life on the dark side by joining Emperor Palpatine and Darth Vader on a mission to attract more than 30 unique species of Galactic bitizens, run intergalactic businesses, and build an all-new 8-bit Death Star. As players progress they will expand their Death Star and construct over 80 types of Star Wars™ themed floors, including secret Imperial levels deep within their space station.
In addition, within the Imperial levels, fans will need to craft special supplies to aid the Empire in its battle against the Rebel Alliance. Players will also need to be extra vigilant to find and capture Luke Skywalker, Princess Leia and other Rebel spies before they can escape.
With the power of the dark side, players will be able to:
· Build over 80 types of Star Wars themed residential and commercial floors like Rebo's Karaoke and Cloud City Spa.

· Attract more than 30 unique species including Wookiees, Ewoks, and more.

· Create top-secret underground Imperial levels to craft special supplies and aid the Empire in its battle against the Rebel Alliance.

· Capture Rebel spies such as Luke Skywalker, Princess Leia, and more before they can escape.

Players can start building the largest, most destructive space station in the galaxy by downloading the game from the iTunes App Store http://di.sn/eOY, Google Play http://di.sn/cNb, Windows Phone Store http://di.sn/dNX and Windows Store http://di.sn/rHq. Star Wars: Tiny Death Star will be coming soon to the Amazon App Store as well.
In this article: android, disney, ios, ipad, iphone, LucasArts, mobile, NimbleBit, pc, Star-Wars, star-wars-tiny-death-star
All products recommended by Engadget are selected by our editorial team, independent of our parent company. Some of our stories include affiliate links. If you buy something through one of these links, we may earn an affiliate commission.