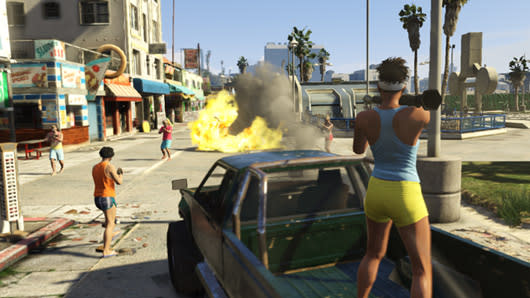 Rockstar announced that its free "Beach Bum" expansion for the GTA Online component of Grand Theft Auto 5 will hit the Xbox 360 and PlayStation 3 next week, adding a number of new vehicles, weapons, and missions to the multiplayer fray, along with a fresh batch of character customization options.

GTA Online players will be able to kick back and soak up the rays as they mangle opponents in new beach-themed Races, Deathmatches, Parachutes, Last Team Standings, Survivals, and Gang Attacks. New vehicles include the BF Bifta dune buggy, the Canis Kalahari off-road truck, and the Bravado Paradise camper van. Also making an appearance is the Speeder speedboat, a fan-favorite watercraft that makes its return to the series after last appearing in GTA: Chinatown Wars.

The Beach Bum expansion will hit the PlayStation Network and Xbox Live as a GTA5 title update on November 19.
In this article: beach-bum, dlc, grand-theft-auto-5, gta-online, gta5, microsoft, playstation, ps3, rockstar, title-update, xbox
All products recommended by Engadget are selected by our editorial team, independent of our parent company. Some of our stories include affiliate links. If you buy something through one of these links, we may earn an affiliate commission.