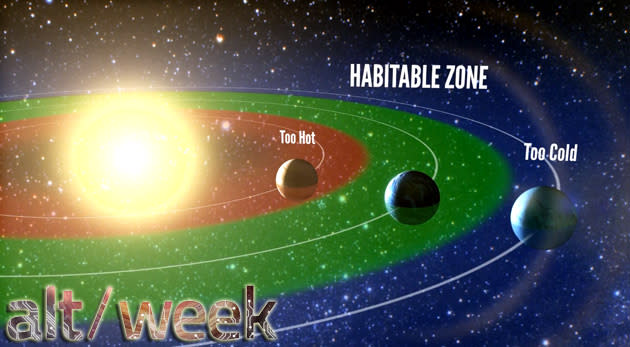 Suddenly things just got real. A new study claims one in five sun-like stars could have a planet capable of supporting life. Hugging your loved ones while thousands of miles away is closer reality, and smog? Apparently we can vacuum that stuff up now. Yeah? This is Alt-week.

Telepresence is all good and well, but sometimes don't you get the feeling it's really just a tablet on wheels? For us, the true telepresence experience would be one where we can be somewhere far-flung, and not only see our relatives or colleagues, but physically interact with them. Enter inForm, a project from the Tangible Media Group at MIT. That name strongly hints at the team's reason for being, and it couldn't be any more beautifully illustrated than in the video above. inForm is a "dynamic shape display" that receives 3D information from a remote Kinect, and renders it using a grid of pins in table that rise and sink to create a low resolution copy of the remote image. Not unlike Pin Art that was a popular exec toy in the 90s. Mostly it's just awesome to watch.

Smog, it's a real issue for many large cities. Especially those in heavily industrial or developing nations with a high urban populations. It can cause real world problems, too, affecting transport, infrastructure and more. But, possibly the most understated issue is the human one. Imagine never seeing the sun, permanently living under a shroud of fug. A problem dutch designer Daan Roosegaarde hopes to tackle with an "electronic vacuum cleaner." By using buried coils of copper to create an electrostatic field, Roosegaarde says you can create holes of clean air in the sky 50-60 meters in diameter. Roosegaarde has created a working prototype, and plans to demonstrate it in Beijing, a city that's no stranger to the curse of being overcast.

Are we alone? Is Earth so rare in its habitability? Well, according to a study recently published in the journal Proceedings of National Academy of Sciences the answer to the latter question at least is "not really." In fact, it reports that around one in five sun-like stars has planets in the Goldilocks zone, according to data from NASA's Kepler spacecraft. If this remains true for the further reaches of our galaxy, this could mean there's potentially a planet in a habitable distance from its star just 12 lightyears from Earth. Still very far, but also extremely close in galactic terms. Whether these planets also support life is, of course, a whole other issue. But the conditions should theoretically be there. So if we set off now...

In this article: alt-week, altweek, inform, mit
All products recommended by Engadget are selected by our editorial team, independent of our parent company. Some of our stories include affiliate links. If you buy something through one of these links, we may earn an affiliate commission.