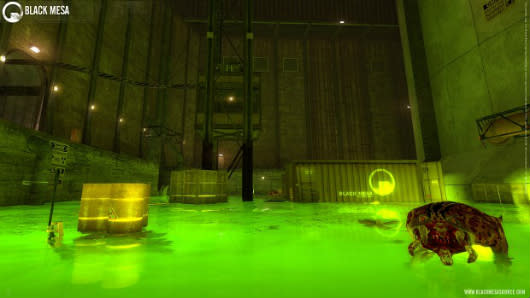 Black Mesa, the fan-made Half-Life mod that re-imagines the game with current technology and a bunch of extra goodies, is coming to Steam soon for "a relatively low price," the development team says. Black Mesa started as a free mod, and there will still be a free version, but the team wanted to give players a chance to support its efforts financially.

"For us, Black Mesa is purely a labor of love," the team writes. "We believe this philosophy has significantly contributed to the overall quality and feel of the game. Our decision to sell Black Mesa rests on two key points. One is we believe we can make the game even better by having full access to the Source engine. This lets us tackle and fix limitations instead of working around them. The second is because frankly, our team could really use the financial help."

Black Mesa was one of the first 10 games to make it through Greenlight in September 2012, granting it a spot on Steam. The current, free edition of Black Mesa is available now through a number of hosts, including Mod DB. Check out the complete list under "Download" here.
In this article: black-mesa, black-mesa-source, half-life, half-life-2, Indie, mod, pc, STEAM
All products recommended by Engadget are selected by our editorial team, independent of our parent company. Some of our stories include affiliate links. If you buy something through one of these links, we may earn an affiliate commission.