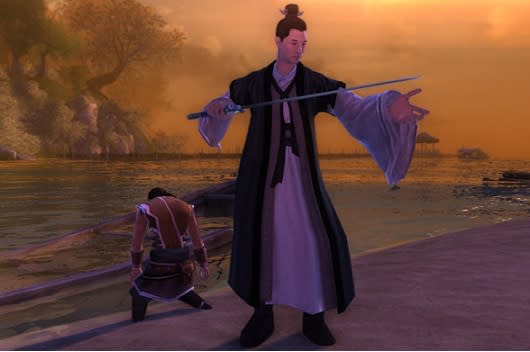 Last time, I mentioned that I might talk about the new school instances in Age of Wushu's Infinite Scrolls expansion, but the truth is that very little is known. I haven't done them (I'm guildless and I'm not really looking), and the guilds that have done them are very closed-mouthed about what is in the dungeons. I've heard they're pretty easy, if it's any condolence.

However, I do have something more fun to talk about, and that's killing other people. You guys may have noticed, but I like PvP a lot. Infinite Scrolls released a new system called Big Jianghu that rewards people for open-world PvP. I have wanted more consequences for PKing for a long time, so I was really excited about this feature. Unfortunately, as with many things in the new expansion, I was bound to be disappointed.

How do I even do this

As of right now, I'm not actually sure how to "break the limit" of my morality. Currently there's a ceiling on morality points, though that number is extraordinarily high, and I will never reach it. There is some scroll that Snail has not explained how to get and that should allow players to get over 10,000 morality points. I didn't even realize that was the ceiling, to be honest.

In the new Jianghu Alignment interface tab (which adds yet another menu to the game), you can view your PK rewards, which you get by killing people with more than 900 morality points. The best way to find people with enough morality to hunt down is to check your server's alignment toplists, then use the normal private message/check info stalking methods to find out whether your target is online and where he is.

Scoring kills on valid targets will net you silver taels (that's unbound silver) and chances for exp, cultivation, and item drops. Many of the rewards cost taels to unlock, but you'll be rewarded with at least some cash for a successful hit. The other rewards are not very impressive. You're not going to get rich being a murderer. I'm not sure what the limitations are on farming individuals. I assume it's similar to bounty suppression such that you are limited to once per person per day. The impact of Big Jianghu

The expansion hasn't been out for very long, so it's hard to gauge just what the actual impact is. People like being on toplists, which is how the alignment toplist values keep climbing. Unfortunately, without some kind of reward for having high alignment, there isn't much incentive to keep it. The main people that have high alignments are those who do lots of instances, especially fast-turnover mini-instances with friends. Since group mini-instances are not commonly done by higher-level characters nowadays (higher-level players just solo them), it's mostly people who are running mid-level forbidden instances (TV/GCC hell, PV hard, etc.) and people who are deliberately farming alignment because they want the points.

I am not sure whether the advent of Big Jianghu will discourage players from getting higher alignments to keep from being a target. In a perfect world, it would (since nobody likes getting PKed), but perhaps there are people who want to be a bit of a target. I don't mind running around with a bounty on my head because it makes me constantly wary of constables. It might be a little weird being wary of everyone who might PK me, though.

Realistically, Big Jianghu will increase the volume of PKing just because people want some kind of reward, even if they're small. On the one hand, it's nice to be rewarded for hunting people down. On the other hand, it does take away from a lot of the friendliness of the game. Fortunately, I suspect that Age of Wushu's friendliness mostly comes from "hero culture," and I think that it will mostly be the same crowd-killing people. I don't think many new people will join simply because Age of Wushu is 1% more like EVE (you're not taking the other person's stuff).

What we might see, I suspect, is that some of the smarter people who farm alignment toplists might deliberately lapse their alignments to fall below one of the current Big Jianghu thresholds.

There are some reasons why this might not happen, though. The first is pretty obvious; people who farm the alignment toplists generally don't care or think about things like whether they get jumped every now and then. Some might even like it. I am almost certain that regardless of server, the person with the current #1 Evil rating likes fighting of virtually any kind.

The second is that I'm not sure how many hunters there are. If you investigate the toplists for bounty hunters or criminals, there are very few people that actively farm points. The bottom of the list is generally composed of people who are very casual about such things. I'm not sure how many people would actively hunt super-good or super-evil people for the rewards. We'll see, I suppose. Given the nature of school discipline, that number is likely to be mostly limited to WV and RG schools that don't take penalties for murder, though members of all schools can PK in a limited fashion as long as they don't get over 2000 infamy.

My biggest concern is farming. Someone who has very high alignment might just let himself be killed by guild members for the reward. Even if there's some limiter that prevents it, that doesn't stop unguilded alts or friends from other guilds from getting in on the bounty hunting action. Obviously, that would be really, really bad for the game. Hopefully that's not what happens, but only time will tell.

Big Jianghu is extremely unpolished and not very well thought-out. It's definitely farmable, though to what extent I'm not really sure. That really does take out the positive impact of such a change. I'll still hunt though, just for the thrill of killing.

Age of Wushu is a wonderous place, full of hidden secrets, incredible vistas and fearsome martial arts. Join Patrick as he journeys through China, revealing the many secrets of this ancient land. The Ming Dynasty may be a tumultuous time, but studying The Art of Wushu will give you the techniques you need to prevail.
In this article: age-of-wulin, age-of-wushu, art-of-wushu, big-jianghu, china, chinese, chinese-mythology, column, expansion, featured, infinite-scrolls, killing, kung-fu, martial-arts, murder, open-world, open-world-pvp, patch, patches, pk, pking, pvp, sandbox, snail-games, snail-games-usa, wushu, wuxia
All products recommended by Engadget are selected by our editorial team, independent of our parent company. Some of our stories include affiliate links. If you buy something through one of these links, we may earn an affiliate commission.