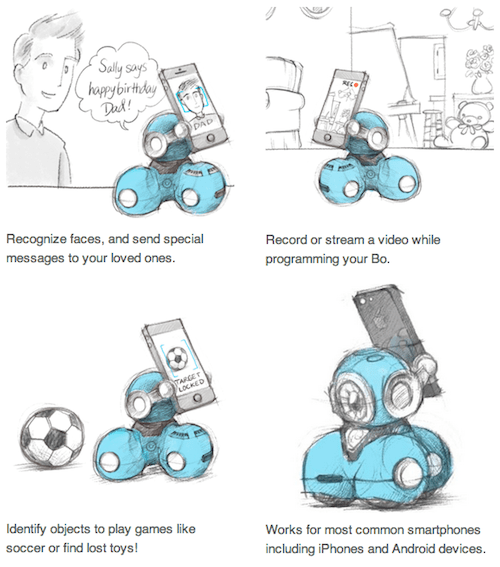 We recently covered Play-i, a company building learning robots designed to teach children as young as 5 the basics of programming in a fun, interactive way. Using a touchscreen device, children can program the bots to play, talk and interact with the world. With just a little over one day left in its initial crowdfunding drive, the company now has the project funded at 470 percent of its original goal, raising more than US$1 million. Given it started with a goal of $250,000, those numbers are incredible.

To celebrate meeting the $1 million dollar mark, the company has unlocked a new stretch goal reward for funders that gives Bo, the robot that can move, an extra addition to its already versatile bag of tricks. Everyone who has already ordered a Play-i robot will be getting a smartphone mount for Bo that gives the robot another level of functionality and programming potential.

With the smartphone mount, Bo can be programed to recognize faces, record or stream video while it rolls around, identify objects to better play games and more. Users can connect their phones to the robot using Bluetooth Low Energy. While the privacy implication for parents may be troubling (though less from hackers than from spying children), this step takes the already impressive Play-i robots to another level. It will be interesting to see if any functionality will be added for the dock in regards to Yana, the immobile robot in the line, but this opens up a new world of possibilities for playing with these bots.

Bo and Yana will be available for purchase in the summer of 2014. If you would like to pre-order the bots and receive the smartphone mount free with your order, act fast. The crowdfunding preorder is almost over.

In this article: accessories, bo, education, play-i, robots, yana
All products recommended by Engadget are selected by our editorial team, independent of our parent company. Some of our stories include affiliate links. If you buy something through one of these links, we may earn an affiliate commission.