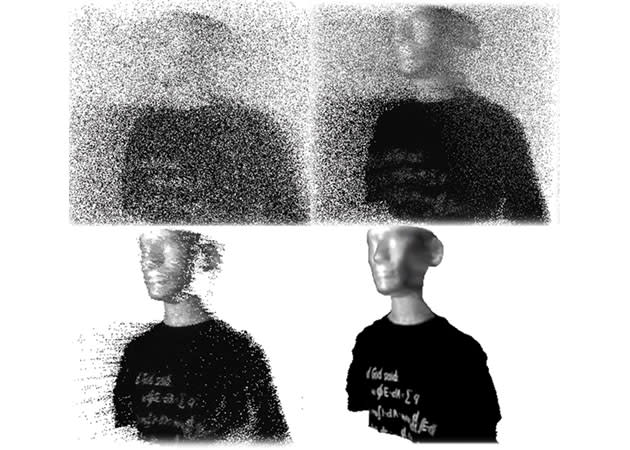 We've seen single-pixel cameras, and now MIT researchers have figured out how to create clear images of dimly-lit objects using single photons -- in 3D, no less. The technique doesn't involve any fancy new hardware, either, as the team worked with a standard photon detector that fired low-intensity visible laser light pulses. The magic happens from the algorithms they developed instead, which can pick out variations in the time it takes for individual photons to bounce off of subjects. After the software separated the noise (as shown above) the result was a high-res image created with about a million photons that would have required several hundred trillion with, say, a smartphone camera. That'll open up new possibilities for low-energy surveying, for instance, or even spy cameras that could virtually see in the dark -- because no laser research project is complete with a sinister-sounding military application.

In this article: 3DScanner, lowlight, MIT, photography, Photon, research
All products recommended by Engadget are selected by our editorial team, independent of our parent company. Some of our stories include affiliate links. If you buy something through one of these links, we may earn an affiliate commission.