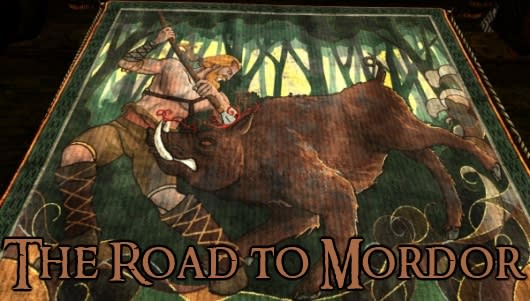 The past five or six months for me and Lord of the Rings Online have been full of apathy and disconnection. While technically fine, Wildermore didn't grip me in the least and left me feeling as if I was slogging through content for no great rewards. I hardly saw or heard other players there and eventually stopped feeling the urge to log in to the game. So while I was somewhat positive about a new expansion, I secretly worried that it would be a lot more of the same.

My play time over the past week or so speaks to how I've taken a shine to Helm's Deep because I've been enjoying it to the exclusion of almost all of the rest of my games. I don't want to overreact because I know there's always that "new car smell" that comes with major game updates like this, but I've started to fall in love with LotRO all over again.

I don't think there's any secret why this is happening. Helm's Deep has (thus far) some of the best questing content in the game to date, and the class revisions have gone a long way to making my characters feel fresh and fun once more. So here are a few vital first impressions of the expansion, both good and bad, that have come to mind as I've traveled Rohan since the launch. You know what? Let's start out with a few concerns I have with this expansion because first impressions shouldn't just be about what makes me happy. I can be thrilled with Helm's Deep while still looking at it with a critical eye.

There are many small quality-of-life improvements that have gone into the expansion (yay for no more traveling rations!), but the high cost of using mithril travel for Western Rohan is extremely off-putting. Turbine gets accused a lot of cheap money-grubbing tactics, and this one is particularly noticeable and tacky. There are a few other new mithril coin costs added to the game that you'll want to be aware of, including housing storage expansion.

While I'm generally pleased that my character has been beefed up, I'm not alone in noticing that we're all way too powerful now for the content. It's as if we've swung from mobs being pretty hardy and tough in Wildermore to wet-paper constructs. Yes, it's great fun to just blast through them, but the lack of challenge is troubling. Will there be nerfs in the future?

One final concern that I have is for the big battles system. I have yet to partake in them (I'm waiting to encounter them organically as part of my epic story), but I still don't see the point of making the rewards jewelry only. How is that tempting? It's gear you can't see! If big battles are taking the place of raids and instances in Helm's Deep, then why not include full armor sets? Where am I supposed to go for those rewards?

Meeting my class all over again

Probably the most controversial part of this expansion is the enormous changes to classes and the institution of the class trait trees. Some people were going to hate these no matter how well they were implemented just because how dare you touch my class. But I've been advocating class streamlining for a while now, so I went into these changes with anticipation.

And frankly? I'm loving it. My Captain feels like a gazelle now, with so many useless and cluttery skills gone. I specced blue line for the first time ever and got giddy over combat healing. And with multi-specs -- finally! -- I'm able to create several builds and switch between them on the fly. I had been playing pretty much the exact same build with the exact same skills since Moria, so this is just bliss.

The changes have caused me to put more effort into creating different sets of legendary items to complement each build, which is admittedly more busywork, but I don't mind. I like having a "bleeder" build and an AoE healer build, and my Cappy has switched to using a shield and one-hander full-time now.

I like how the deed system was updated to give you additional points for completing class deeds (and all of the extra TP I got upon logging in for retroactive completions was welcome). I even encountered a quest that gave a point as a reward, which was pretty nifty.

It's hard to say how the changes have been received in the different classes. I've been keeping an eye on general chat and our kin chat, and pretty much all of what I've seen has been positive. Mostly it's just been folks discussing the new lines, figuring out how to rebuild and play their characters, and giving little delighted "oohs!" when they discover a neat surprise in there.

I'm not sure how I feel about the prospect of hybridizing. Due to the way the trait trees are set up, your specialization line costs only one point per upgrade, but the other two lines cost two points. This doesn't feel like much of a choice; you're going to dump most of your points into your specialization while splashing a few points elsewhere after you're done. Otherwise, you're going to be "wasting" a lot of points trying to create a balanced hybrid. Maybe there's an advantage to this that I'm not seeing, but who knows. Probably one of the most striking aspects of the first few hours of Helm's Deep is just how little combat is involved in it. LotRO doesn't get enough credit for coming up with quests that go outside of the standard kill-everything-that-moves, but it really should because it's in these quests that we see ways to be heroes that don't involve massacres.

Going into Helm's Deep, I was tasked with boarding up homes, investigating privies, finding a lost girl, fishing alongside of an old man, weeding gardens, cleaning up tables, and burying murdered townies. To some, I suppose these would be annoying jobs, a point that is actually addressed in one of the quests where you lug along a minstrel who doesn't understand what it is that you do. After finding herbs to help an old lady's aches and pains and seeing her reaction, he has a change of heart: He sees what everyday heroism is like. It isn't just all epic battles for us in Middle-earth; it's being humble, it's being helpful, and it's leading by example.

Yeah, the pacing of book 11 was pretty weird, with so little combat happening for the extent of it. What I think happened is that the devs put a lot of effort into making Edoras and wanted you to see it while front-loading a lot of Lord of the Rings fanservice.

In so many ways, these tasks reminded me of what I loved about my early days in the Shire and Bree-land. They connect me with the NPCs and help me understand their perspectives and their lives instead of rushing me by them in an effort to get to the next mob lair more quickly. This attention to detail and effort given to show us the spectrum of heroism is what continues to set LotRO apart.

The connected, cohesive world of LotRO is its greatest strength, along with the framework established by the novels' events. What we're encountering now is not isolated with what's come before but a natural extension of the progression of the war. If Riders of Rohan helped me understand the plight of the Rohirrim and come to love their culture, then Helm's Deep is the moment when I'm called into action to help save the country in the face of impossible odds. Having an expansion themed around a country-wide retreat is something I've never experienced in an MMO, and it makes for captivating play.

So if you'll excuse me, I'm going to wrap this up for now because I want to get right back to it. If nothing else, that's a good sign of a great expansion.

When not enjoying second breakfast and a pint of ale, Justin "Syp" Olivetti jaws about hobbits in his Lord of the Rings Online column, The Road to Mordor. You can contact him via email at justin@massively.com or through his gaming blog, Bio Break.
In this article: battle-of-helms-deep, expansion, f2p, fantasy, featured, first-impressions, free-to-play, helms-deep, lord-of-the-rings, lord-of-the-rings-online, lotro, opinion, road-to-mordor, rohan, the-road-to-mordor, turbine, turbine-entertainment
All products recommended by Engadget are selected by our editorial team, independent of our parent company. Some of our stories include affiliate links. If you buy something through one of these links, we may earn an affiliate commission.