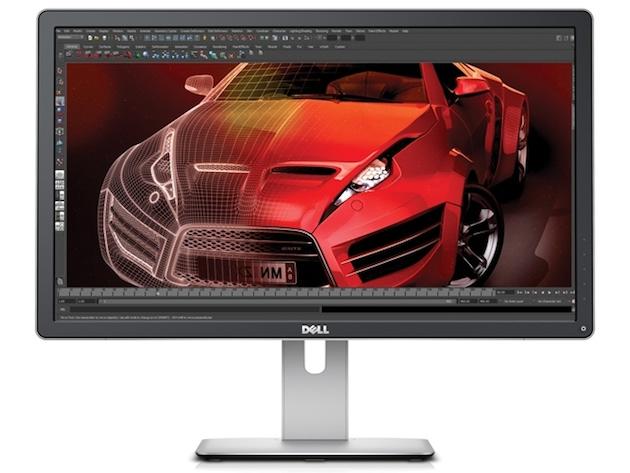 4K is here to stay, what with a vast number of companies ramping up production on all types of different panels. Today, Dell is the latest one ready to join the frenzy in full force, announcing availability details for some new, super high-res monitors as part of its UltraSharp lineup. Naturally, the main feature here is the 3,840 x 2,160 resolution on them, although there are other highlights worth mentioning. For its part, the newcomer UltraSharp 24 (you know, the one we caught earlier) has an IPS LED screen with Dell's PremierColor tech, which translates to being able to support 99 percent of AdobeRGB colors, and offers access to HDMI, DisplayPort, USB 3.0 and a 6-in-1 card reader. The UltraSharp 32, meanwhile, boasts the majority of the same specs as its smaller 24-inch sibling, save for the fact it's sporting a 32-inch, IGZO LCD panel.

Furthermore, Dell also took the time to reveal it plans to release a 28-inch model sometime in the near future, noting that this "will be the most affordable Ultra HD monitor in the industry when it is launched." Speaking of which, The UltraSharp 32 is now up for grabs worldwide for $3,499, while the $1,399 UltraSharp 24 is only available in South and North America to begin with and elsewhere on December 16th. No word yet on how much exactly the UltraSharp 28 will cost, but Dell did say we can expect it to be under $1,000 when it hits shelves in "early 2014." 2
In this article: 4K, Dell, monitor, Ultra HD, UltraSharp, UltraSharp 24, UltraSharp 28, UltraSharp 32
All products recommended by Engadget are selected by our editorial team, independent of our parent company. Some of our stories include affiliate links. If you buy something through one of these links, we may earn an affiliate commission.