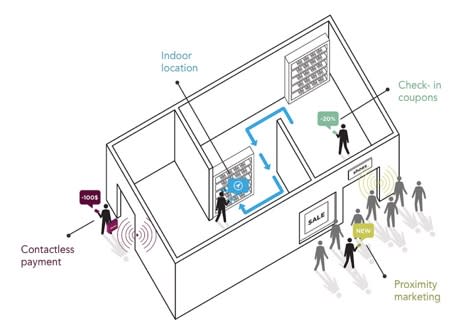 Apple is rolling out iBeacon technology to all its 254 US Stores starting today, December 6, says a report from the Associated Press. The technology will allow customers to receive messages about products, events and discount offers as they walk through a store. It will also alert customers when an order is ready to be picked up.

Apple demoed the technology at its Fifth Avenue store in New York City earlier this week. The store has 20 iBeacon transmitters, some of which are iPhones and iPads that utilize this iOS 7-based technology. The iBeacons will connect to your iOS device using Bluetooth, and the connection is optional for the user. You don't have to be pinged about upcoming events if you don't want to. The iBeacons offer a distinct advantage over GPS, which doesn't work well indoors and lacks the sensitivity to detect movement around a store.

iBeacon is also being rolled out at Macy's and select Major League Baseball parks in the US.

In this article: Apple Store, iBeacon, iOS, iOS 7, Retail
All products recommended by Engadget are selected by our editorial team, independent of our parent company. Some of our stories include affiliate links. If you buy something through one of these links, we may earn an affiliate commission.
Share
Tweet
Share