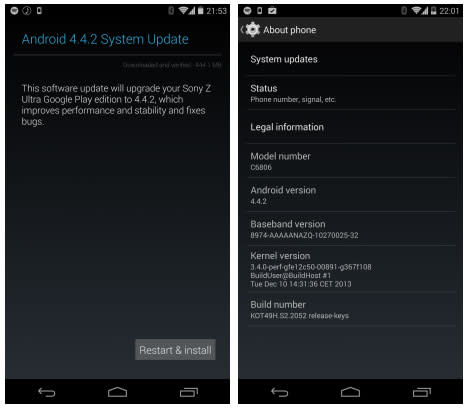 As Android updates go, version 4.4.2 shouldn't get anyone hot under the collar -- it's mostly just bug fixes and software removals. But in the case of the Sony Z Ultra Google Play Edition, the requisite fixes are, in fact, quite substantial. As we noted in our hands-on with the massive 6.44-inch device, the Z Ultra shipped with a few unforgivable quirks, like the inability to uninstall apps (which is what you'd expect from a skinned device, not pure Android), or sideload apps via the Unknown Sources option in the security settings menu. With 4.4.2. rolling out today, all of that's now been remedied, in addition the convenient deletion of Google's not ready for primetime Apps Op feature which allowed users to manage privacy settings for individual apps. Again, it's as humdrum as updates get, but at least now your très cher Z Ultra is actually worth the money.

In this article: Android4.4.2, AppsOp, bugfixes, google, GooglePlayEdition, mobilepostcross, sony, ZUltra
All products recommended by Engadget are selected by our editorial team, independent of our parent company. Some of our stories include affiliate links. If you buy something through one of these links, we may earn an affiliate commission.