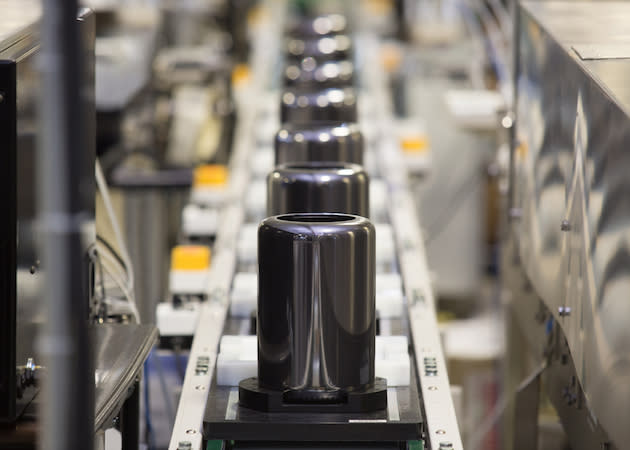 We knew it was coming, now it's almost here. Apple has confirmed that the new Mac Pro will go on sale from tomorrow, starting at $3,000. For that, you'll get a 3.7GHz quad-core Xeon CPU ("with Turbo Boost speeds up to 3.9 GHz"), 12GB DRAM, two AMD FirePro D300 GPUs, and a 256GB SSD. As usual, you'll be able to order online via Apple's online store, through various resellers and, perhaps most importantly, Apple's retail stores. While there's no word on whether you'll be able to walk out of an Apple Store with a Mac Pro tomorrow, the fact that it's assembled in the US suggests that could be the case, at least in the States. We've contacted Apple for clarification and will update you when we know more.

In this article: apple, desktop, mac, mac pro, os x
All products recommended by Engadget are selected by our editorial team, independent of our parent company. Some of our stories include affiliate links. If you buy something through one of these links, we may earn an affiliate commission.