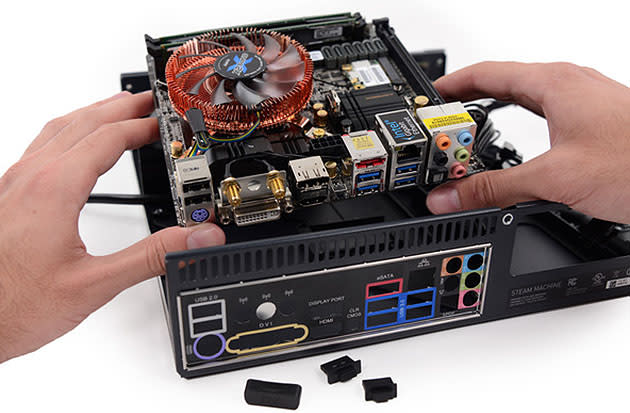 It looks like tearing apart a Steam Machine apart is infinitely easier than getting your hands on one. Luckily iFixit had one of few fortunate beta testers on its crew, so they naturally proceeded to dismember his box and controller. Unlike other gaming consoles, this one is designed to be opened and modded by its owners, since it's essentially a small form factor PC with removable components. After removing the single Philips screw (yay!), the team found a punchy Zotac NVIDIA GTX 780 3GB graphics card, 1TB Seagate hybrid SSHD drive, 16GB of DDR3 RAM, an Intel Core i5-4570 CPU clocked to 3.6GHz and a 450W power supply. As for the controller, the team easily cracked it open and were fans of its configurable nature and wealth of buttons. Overall, the only snafus iFixit noted were hard-to-remove RAM and a tricky cable routing system, and gave it a top-notch 9 out of 10 repairability score. This is the part where we normally say to avoid such exploits if you're lucky enough to get one of the 300 boxes -- but given these results, we'd say go for it.

In this article: GeForceGTX780, iFixit, NVIDIA, Steam, SteamMachine
All products recommended by Engadget are selected by our editorial team, independent of our parent company. Some of our stories include affiliate links. If you buy something through one of these links, we may earn an affiliate commission.