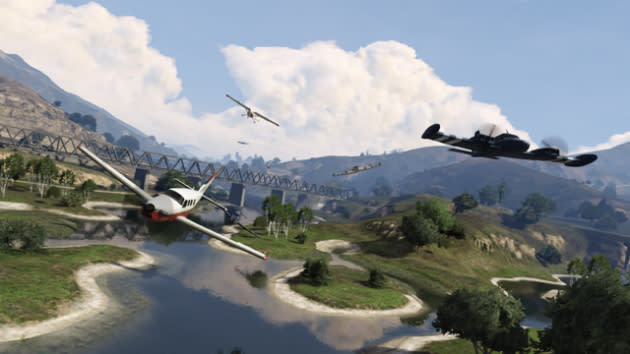 Ready for a slew of Grand Theft Auto updates? We sure hope so. First up, developer Rockstar Games has put its stamp of approval on ten of the GTA Online community's million-plus custom-match submissions. Because these races and deathmatches -- including a NASCAR-style circuit atop a skyscraper and a melee-weapon prison-yard fight -- are now Rockstar Verified, they're available on both PS3 and Xbox 360, regardless of which platform they originated from. If your magnum opus didn't make the first cut, relax: The outfit says there's more verified missions coming ahead of the multiplayer heists and single player DLC due next year.

If you fancy mobile mayhem however, GTA: San Andreas' Grove Street Families arrived on Android late last week. Check the reviews before clicking that buy button though, performance issues and glitches have been noted even on high-end flagships like the Galaxy S4. While San Andreas' appearance on Google's mobile OS may have been tardy (and buggy), it's still MIA on Windows Phone 8 despite the simultaneous release we were expecting. Last but not least, GTA: Chinatown Wars is back on iTunes, and now compatible with iOS 7 and your iPhone 4 or 4s' Retina display -- should you favor a Liberty City built specifically for mobile gameplay to SA's ported faux-SoCal. We've reached out to Rockstar about the Android issues plus a timetable for our WP8 ride with Big Smoke, and will update this post if we hear back. Until then, happy car-jacking.

In this article: android, GrandTheftAuto, GTA, gtaonline, hdpostcross, IOS, mobilepostcross, RockStar
All products recommended by Engadget are selected by our editorial team, independent of our parent company. Some of our stories include affiliate links. If you buy something through one of these links, we may earn an affiliate commission.