Google Calendar wants you to achieve your goals

The Daily Grind: What long term MMO goals are you working toward? 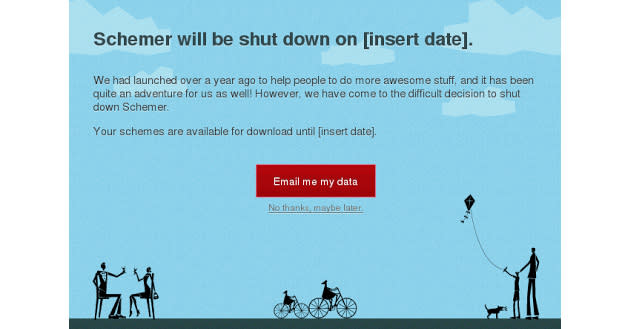 We can't blame you if you haven't heard of Google's Schemer; the goal sharing service launched at the end of 2011, but it hasn't received much publicity (or traffic) since. Accordingly, the crew in Mountain View may be close to shutting Schemer down. Google Operating System has leaked an internal version of Schemer's website that includes an unfinished closure page inviting users to export their data. It's not clear how serious Google is about closing Schemer, however. The internal site may reflect real plans, or it could be a just-in-case placeholder; we've reached out to the company for a definitive answer. We won't be surprised if Schemer gets the axe, though, when Google has shut down more beloved services in the past.

In this article: goals, google, internet, leak, planning, schemer, shutdown, web
All products recommended by Engadget are selected by our editorial team, independent of our parent company. Some of our stories include affiliate links. If you buy something through one of these links, we may earn an affiliate commission.