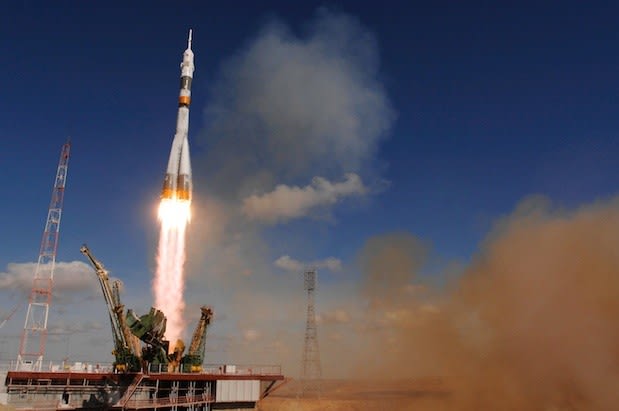 NASA has been relying on the Russians to get astronauts to the International Space Station since the shuttle program was retired in 2011, and it looks like it will be doing so for at least a few years longer. The space agency confirmed today that it's been forced to extend its contract for crew transportation services with Roscosmos until June of 2017, a move that comes at a cost of some $424 million. In announcing the news, NASA also reiterated that it is "committed to launching US astronauts aboard domestic spacecraft as soon as possible," and says that it should be able to do so by 2017 provided it receives all of the funding outlined in the Obama administration's 2014 budget. NASA Administrator Charles Bolden further adds that he's "pleased with the progress our commercial crew providers are making," and remains confident that (again, funding-provided) they will be helping it carry astronauts into space "in just a few short years."

WASHINGTON, April 30, 2013 /PRNewswire-USNewswire/ -- NASA has signed a $424 million modification to its contract with the Russian Federal Space Agency (Roscosmos) for full crew transportation services to the International Space Station in 2016 with return and rescue services extending through June 2017.

NASA is facilitating development of a U.S. commercial crew space transportation capability with the goal of achieving safe, reliable and cost-effective access to and from the space station and low-Earth orbit beginning in 2017. This modification to the Roscosmos contract will ensure continued U.S. presence aboard the space station as NASA prepares for commercial crew providers to begin those transportation operations.
NASA is committed to launching U.S. astronauts aboard domestic spacecraft as soon as possible. Full funding of the administration's Fiscal Year 2014 budget request is critical to making these domestic capabilities possible by 2017.

This firm-fixed price modification covers comprehensive Soyuz support, including all necessary training and preparation for launch, flight operations, landing and rescue of six space station crew members on long-duration missions. It also includes additional launch site support, which was provided previously under a separate contract. The modification will allow for a lead time of about three years Roscosmos needs to build additional Soyuz vehicles. These services will provide transportation to and from the International Space Station for U.S., and Canadian, European or Japanese astronauts.

Comments about the contract from NASA Administrator Charles Bolden are available on the agency's administrator blog page at:
http://go.nasa.gov/g4C5Ov

For more information about the International Space Station, visit:
http://www.nasa.gov/station

For information about other NASA programs and missions, visit:
http://www.nasa.gov

Source: NASA
All products recommended by Engadget are selected by our editorial team, independent of our parent company. Some of our stories include affiliate links. If you buy something through one of these links, we may earn an affiliate commission.