This is the first object 3D-printed from alien metal

The humble beginnings and ambitious future of 3D printing 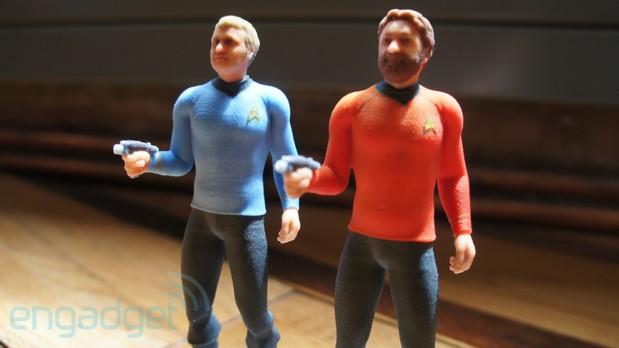 When the company that helped invent 3D printing asks you if you want to be turned into a Star Trek statue, the only right answer is: "how soon?" Naturally, we immediately shot off a couple of selfies (front-facing and profile) and ticked off a couple of personal details: I wanted a phaser, naturally, and poor Tim got stuck in a red shirt, to help bring out the natural Riker in that beard of his. Sadly, we only had the option of the Original Series, in the lead up to launch, so you've got to use your imagination. As for the inscription on the base, Engadget Show producer Benjamin (who you can see after the break) asked for "Peace and Long Life," in keeping with his pointy-eared Vulcan theme, and I went with "May the Force Be With You," because, let's face it, I was always more of a Star Wars guy anyway. Tim wanted the simple, but expressive "Khaaaaaaan!" but sadly didn't make it in under the wire, so he'll have to get creative with a Sharpie.

Once you send in two photos, fill out the specifics and pay the (admittedly somewhat steep) $70, someone at one of 3D Systems' fulfillment centers will convert your image into a 3D model, import it into the company's software and then print it out using the Projet 660pro. It's a rebrand of the high-end device we saw at work at Laika's Portland studios, printing out faces for the then-forthcoming stop-motion feature ParaNorman. The printer is capable of rendering objects in impressively high resolution, far more than you've been seeing on those consumer printers you've heard so much about. It can also print in full color, thanks to jets that spray a bed of drywall-like gypsum plaster, utilizing off-the-shelf HP ink cartridges. The whole process takes around three hours to complete a figure (about an hour per inch). Once printing is done, you excavate the models from the powder bed and then clean the excess powder off using a jet of high-pressure air. The process makes you feel a bit like an archeologist. Even after running it through the air blast, the figure still looks a bit ghostly, so 3D Systems media relations team member Alyssa Reichental took us through the next step in the process, using Vulcan Ben: squirting a Super Glue-like substance over the logic-loving humanoid producer. The final step both enhances the color of the statue and adds a bit more strength to its fragile structure. Once it's all done, the company boxes it up in a nice package and sends it off. Sadly, the packaging wasn't finished in time for our preview, so our 3-inch likenesses were delivered in bubble wrap and Styrofoam peanuts.

As far as accuracy goes, Ben's figure, which was the first one out of the box, was probably the least convincing of the three. For one thing, none of us really recognized the guy without his glasses on (sorry Star Trek fans, the machine doesn't do eyewear particularly well -- or else Tim would have no doubt rocked his Google Glass), and facial hair can be a bit tricky. Tim's beard, on the other hand, was fairly spot-on and the hair was rendered impressively on all of ours. My figure also turned out pretty well, and while I wish I could claim that those were my pecs, they're actually the same ones that everyone gets. And though the printer is capable of much higher resolution and consistency than your standard extrusion desktop system, the powder still leaves things a little rough to the touch, with a slightly sandpaper-like surface.

Is it worth the $70? It's a bit of a tough sell if you're picking one up for yourself, but this could be the perfect gift for the Star Trek fan in your life who has everything -- everything save for a 3-inch figure of themselves, that is. As for non-Trekkers, well, we suspect that this is only the first in a long line of branded, cloud-printable products from the company.

Users can personalize their figurines with a variety of options such as authentic Star Trek ranks from ensign through captain, uniform colors, and poses including the famous "live long and prosper" Vulcan gesture complete with Vulcan ears. The unique 5.5" figurines are 3D printed in full-color on 3D Systems' Projet® 660Pro, with a ceramic-like feel. Star Trek 3DMe figurines retail for $69.99 each and are available on Cubify.com.

"We're delighted to offer Star Trek fans the chance to join the crew of the Enterprise in a way that was never before possible – by replicating themselves in 3D as a crew member," said Sarah W. Stocker, Senior Director of Cubify for 3D Systems.

Fans can be among the first to join the Starship Enterprise in 3D by going to Cubify.com today.

In this article: 3d systems, 3dSystems, hands-on, star trek, StarTrek
All products recommended by Engadget are selected by our editorial team, independent of our parent company. Some of our stories include affiliate links. If you buy something through one of these links, we may earn an affiliate commission.