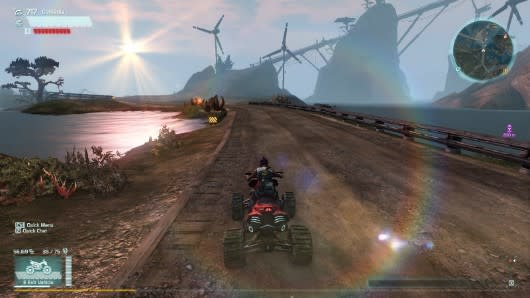 I had my World of Warcraft year. In 2007, when 'The Burning Crusade' came out, the game clicked with me and it became almost the only thing I played for months on end, to the point where I started raiding with an up-and-coming guild. I know many other people who've had that year, with WoW or some other massively multiplayer game, before they lost interest, burnt out, or continued out of habit more than joy. In the last year or so, I've tried several massively-multiplayer role-playing games – Star Wars: The Old Republic, Guild Wars 2, The Secret World – and couldn't find that magic again. I could admire the design, but quickly lost interest in playing them. I was starting to think I'd never really like a massively multiplayer game again – and then, on a whim, I decided to check out Defiance.

Defiance is the main game I've been playing for two weeks now, and this may continue. It's not that it's less flawed than the other MMORPGs, but instead that the parts of the game that it focuses on hold much more appeal to me. To put it another way: Most games within this genre are focused on combat, and Defiance's combat is significantly more fun for me than its competitors'. The defining aspect of most games of the EverQuest/WoW school is their rigidity. What is possible in the game is carefully controlled and parceled out. At the micro level, this means that combat is usually built on a collection of special skills based on cooldowns – you can't do anything more or better than what your cooldowns allow you to do. Player skill is moderately important, but character skill is far more relevant. At the macro level, it manifests with restrictions like only being able to raid certain dungeons for the best equipment once per week.

Almost every aspect of the game is restricted to encourage specific behavior. Character classes force players to band together in particular groupings (tank, healer, damage) to succeed; mastering crafting skills takes large amounts of time and luck, and so on. There are two good reasons for why this is the case: Encouraging players to take and spend time makes subscription fees justifiable both practically and emotionally, while also allowing all players to participate on a relatively level playing field.

What this adds up to is that the moment-to-moment gameplay of most MMORPGs isn't satisfying in and of itself. Instead, the pleasures come from making plans and having them come together (especially with other players), or having the time you've invested bear fruit as a new item.

The problem I start having is that I find myself worrying about what the best thing to do for my future character might be without actually enjoying what that character is doing in the moment. I tried to figure out whether my character class would be viable for raids in The Old Republic when I barely ever made it past level 30, for example.

In Defiance I just shoot stuff and it's fun.

This works because the shooting works. Similar to Borderlands, there are multiple weapon types to choose from, with various random stats attached to each. Almost every one of them feels viable and different in a really satisfying way. The fast-paced submachine guns are remarkably effective at close range, but chew through ammo if you're not careful. A grenade launcher requires good timing to use effectively, but can do massive damage. The core component of MMORPGs, fighting enemies, feels genuinely fun here, as opposed to simply a mechanism for improving your character.

Structurally and geographically, Defiance reminds me a lot of Guild Wars 2. ArenaNet's game tried to break down the restrictions that so many MMORPGs had. The most notable is the subscription fee, but it also included aspects like fast travel, automatically grouping players together, and not going overboard with the healer/tank/damage roles for groups. But it was still built around that traditional form of slow, cooldown-based combat – except now with more dodging, a key part of the rigidity of the MMORPG even though much of the rest of the game gets rid of the reason for that rigidity to exist.

Rowan Kaiser is a freelance writer currently living the Bay Area, who also writes for The A.V. Club, and has been published at Salon, Gamasutra, Kotaku, and more. He still occasionally finds Ultima VI Moongate maps and mantra notes when he visits his parents' house. Follow him on Twitter @rowankaiser.
In this article: defiance, Human-Head-Studios, microsoft, pc, playstation, ps3, Trion-Worlds, xbox
All products recommended by Engadget are selected by our editorial team, independent of our parent company. Some of our stories include affiliate links. If you buy something through one of these links, we may earn an affiliate commission.