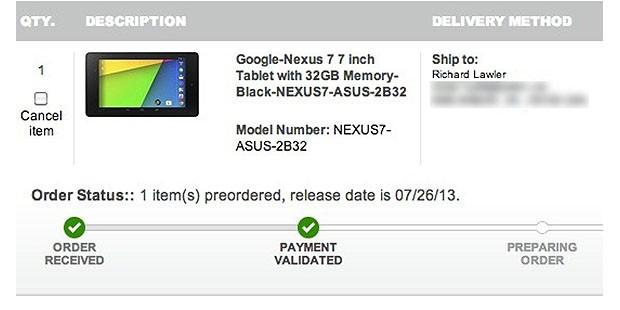 A tipster has told us that the latest Nexus 7 from Asus and Google will hit Best Buy stores today, and a pre-order we placed earlier for the device seems to confirm that. We put our money down for one when the order page first went up, and while the confirmation originally said it would arrive on the original July 30th launch date, it's now telling us that we can expect our tablet later today. That jibes with info we were given by a source claiming to be the manager of a Best Buy store. He said that while pre-orders started yesterday, "there were few (of them) in my region," meaning that "if you are present at a (Best Buy) location today at opening, you have a good chance of buying the tablet." He added that some stores don't have stock yet due to agreements with Google, but pre-orders are still possible at those locations. Until we receive confirmation, however, you may not want to make a long journey to one of the outlets. Meanwhile, we've reached out to both Google and Best Buy.

Update: Best Buy has touched base, telling us "we can confirm that the Nexus is available at all Best Buy and Best Buy Mobile stores and BestBuy.com now."

In this article: Best Buy, BestBuy, Nexus 7, Nexus 7 2013, Nexus7, Nexus72013
All products recommended by Engadget are selected by our editorial team, independent of our parent company. Some of our stories include affiliate links. If you buy something through one of these links, we may earn an affiliate commission.