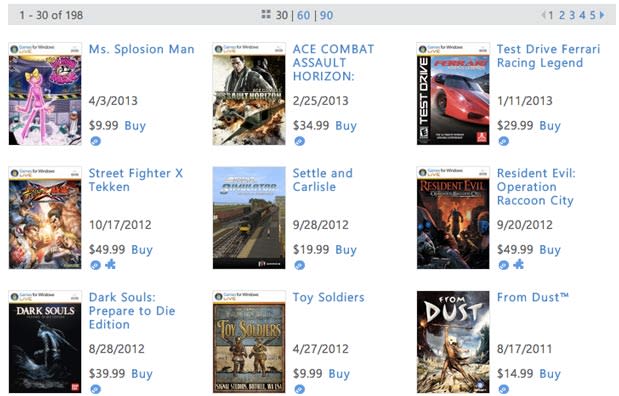 If Microsoft hiring a former Valve employee wasn't proof enough that it's looking to overhaul the Windows gaming experience, it's now announced that PC titles will be dropped from the Xbox.com store come August 22nd. An announcement on the Xbox support page loosely ties the closure to the impending death of MS points in favor of real currency, although we can't see how they're necessarily related. If you've splurged on PC games and extra DLC through the Xbox storefront, not to worry, as everything will continue to be accessible though the Games for Windows Live client, which will persist unaffected. Additional game content will also remain on sale in some instances, but that'll vary by title.

When the PC Marketplace within Xbox.com does shut down, any Windows Live games published by Microsoft won't be available anywhere, although one can only assume they'll return to some new platform in the future. Newer PC games and XBLA ports are up for grabs in the Windows 8 store, of course, so perhaps MS will end up offering them there. Or, maybe it's time to revive the dedicated portal model -- that seems to be working for the other guys.

Via: Ubergizmo
Source: Microsoft
In this article: game, games, gamesforwindows, gamesforwindowslive, microsoft, microsoftpoints, microsoftwindows, windows, windowslive, xbox.com
All products recommended by Engadget are selected by our editorial team, independent of our parent company. Some of our stories include affiliate links. If you buy something through one of these links, we may earn an affiliate commission.