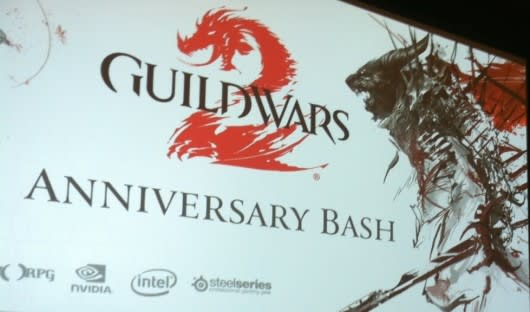 It seems that more and more studios at PAX are electing to avoid the convention hall altogether and go for off-site venues, especially when it comes to parties and fan events (I was told that even a small booth on the exhibit floor can cost a company $100,000). So while Guild Wars 2 was notably absent from the PAX Prime exhibit hall this year, it was quite a different story a few blocks away at the Renaissance Hotel in Seattle where ArenaNet set up camp for the title's anniversary bash. Players began lining up for the panels, playthroughs, and party hours in advance, all sharing the same glow of enthusiasm for the game they've enjoyed over the past year.

By all accounts (I wasn't there a year ago), the launch party for Guild Wars 2 at last year's PAX was far more insane. Yet I think that this year there was a better feel to it. It wasn't about hype and anticipation for the fans but about experience and shared affection for the title they'd been enjoying since last August.

So join me as I recap the anniversary bash, step by step, and perhaps we'll learn a thing or two about where this game is going in the near future.

ArenaNet President Mike O'Brien was on hand to warm up the crowd with the new anniversary video and a pep talk to the crowd of 400 or so fans. "Tyria is your world," he began, "and we're doing this for you."

O'Brien hit on what seemed to be ArenaNet's big talking points for the convention: The team wants players to be able to shape the future and have a noticeable impact on the game and its world. He also said that anyone who's a fan of Guild Wars 2 already has a friend at ArenaNet and encouraged fans to meet the devs later on to talk.

He wrapped his presentation up with the two big reveals of the show: the return of Super Adventure Box for next week and the Tequatl 2.0 overhaul that's coming on September 17th. Of course, the applause for these announcements was far eclipsed by the ovation when he casually let slip that the new looking for group interface would be coming on the 17th as well. It's easy to see where the real fan passion lies.

The crowd settled in for an extended preview of the new Tequatl encounter, first through a developer overview and then through three player-led sessions. The devs pointed out the new mechanics, such as the shock wave that had to be jumped or the vortex that can suck players far down into the murky mire. The encounter required a ton of coordination: Some players had to attack the dragon directly, some manned turrets that gave attacking players a huge helping hand, and some had to defend the turrets from adds assaulting them. If players weren't doing well, a giant bone wall popped out to protect Tequatl, and this had to be hacked down before the fight could proceed.

Pro-tip: Using the nearby jump pads to dodge the ever-growing shock waves is not only practical but wicked awesome as all get out.

The encounter had several stages, including one at 75% that involved protecting batteries so that a mega-cannon could fire and do some real damage to the beast. To make matters more stressful, the fight was on a timer. While none of the three groups on stage managed to bring the dragon down (even with a little developer "assistance"), the last group came within striking distance when the clock ran out.

Probably the most interesting part of the anniversary bash came when many of the dev leads from across the company lined up on stage for a Q&A panel on the living world and just about anything else that the fans wanted to ask. Chances are that if you had a pressing issue on your heart about Guild Wars 2, it was probably addressed during the panel.

For the interests of time and space, here were some of the salient details that I took away from the event:At the party later that evening, players had the opportunity to mingle with the developers, share their favorite stories of Guild Wars 2 to a camera crew in exchange for a t-shirt, and spend some hands-on time with Super Adventure Box. It was a rollicking good time to see a developer die three times in rapid succession thanks to the new ultra-tough Tribulation mode -- and when you know the maker has a hard time, there's going to be very little help for you.

One year down, a lifetime to go. Guild Wars 2 is giving the impression that it's just started to explore the possibilities that are out there.

Massively's on the ground in Seattle during the weekend of August 30th to September 2nd, bringing you all the best news from PAX Prime 2013. Whether you're dying to know more about WildStar, The Elder Scrolls Online, EverQuest Next, or any MMO in between, you can bet we'll have it covered!
In this article: anet, anniversary, arenanet, buy-to-play, con, convention, event, event-coverage, events, expo, fantasy, featured, guild-wars-2, gw2, living-world, massively-event-coverage, mike-o-brien, mike-obrien, ncsoft, panel, party, pax, pax-2013, pax-prime, pax-prime-2013, penny-arcade-expo, preview, previews
All products recommended by Engadget are selected by our editorial team, independent of our parent company. Some of our stories include affiliate links. If you buy something through one of these links, we may earn an affiliate commission.