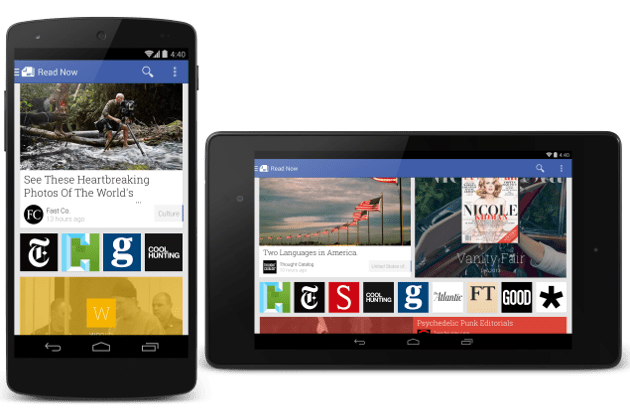 Google is not particularly great at keeping secrets. Its Nexus devices always leak and peeks at code are constantly revealing features before they're announced. So, it's no surprise that, exactly one month after we reported references to a Google Play Newsstand popping up, Mountain View is taking the wraps off the new content hub. Like its Apple counterpart, it will play home (get it?) to both newspaper and magazine subscriptions, and it'll even pull in articles from sites and blogs you choose to follow (like this one, we hope). And, even though you'll be able to have your New York Times subscription delivered through Newsstand, you're not forced to use it. The stand alone Times app will continue to be available directly from your home screen.

Articles viewed through the new Newsstand app will be specifically formatted for your tablet or phone, complete with images, audio or video inline. And they'll be available offline so you can can catch up on your news, even if you happen to be on one of the few flights left in the US without WiFi. And, if you come across something particularly interesting, but don't have the time right now for a 4,000 word expose on how Facebook uses your personal data, you can mark it to read later.

The new app will lead to several changes in Google's ecosystem as it rolls out over the next several days. In the US, Canada, UK and Australia users of the Play Magazines app will be asked to upgrade to Newsstand and the periodicals section of the store will be renamed to match. Where magazines aren't available, it will be Currents that prompts users to upgrade, as much of its functionality will be folded into the Newsstand app. The dedicated Flipboard competitor will continue to be available, at least for a period of time, but its clear that Google wants everyone to hop on the Newsstand train, which has much deeper hooks into the Play platform. It even borrows a bit of magic from All Access with a home page of recommended articles based on your tastes and what other people are reading. So, even if you don't follow to The Atlantic, if a particular piece on drone warfare happens to be popular, Google will bring it to your attention. Especially if you have a history of reading articles about technology and warfare.

With today's launch, Google is putting the focus on Android, but iOS users will be able to enjoy the fruits of Mountain View's labor as well... eventually. A spokesperson told us that Newsstand will be coming to Apple's mobile OS early next year, primarily as a replacement to Currents. And, while you probably won't be able to purchase subscriptions directly through the app, you will be able to pick up periodicals through the web storefront and have them delivered to your handset or tablet.

If you're feeling particularly impatient and don't want to wait for Magazines or Currents to prompt you to update, you can download Newsstand from the Play store today.

Source: Google Play Newsstand
In this article: android, currents, google, googleplay, ios, mobilepostcross, playmagazines, playnewsstand
All products recommended by Engadget are selected by our editorial team, independent of our parent company. Some of our stories include affiliate links. If you buy something through one of these links, we may earn an affiliate commission.