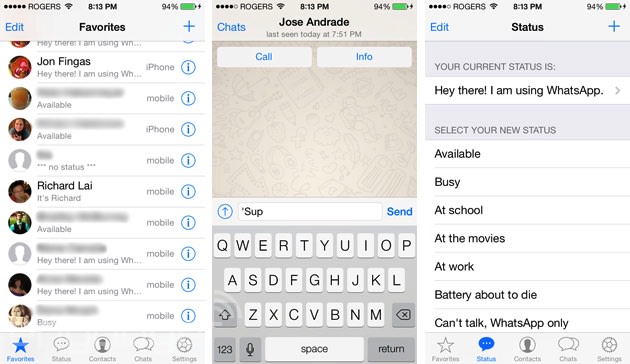 WhatsApp is more than a little late to the iOS 7 app update party, but it's making up for the long delay with a sweeping upgrade to its Messenger client. In addition to sporting an appropriately flatter interface, the new version introduces broadcast lists -- you can now address large groups of people at once, such as an entire class. The refresh also improves location sharing with a 3D map, while shutterbugs can crop images and see larger thumbnails. It's easier to manage blocked contacts, too. Chatty iPhone owners can grab the WhatsApp update for free from the App Store, although they'll eventually need to fork over 99 cents per year.

Via: 9to5 Mac
Source: App Store
In this article: app, chat, InstantMessaging, ios, ios7, iphone, mobilepostcross, smartphone, whatsapp, whatsappmessenger
All products recommended by Engadget are selected by our editorial team, independent of our parent company. Some of our stories include affiliate links. If you buy something through one of these links, we may earn an affiliate commission.