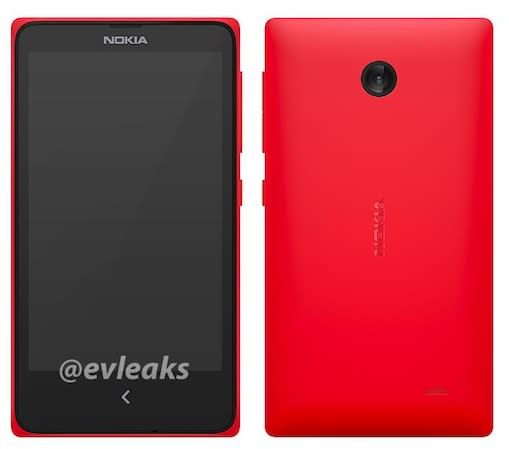 The image you see above is the rumored Nokia Normandy, which Twitter leakster @evleaks revealed at the end of last month. While not much was known about the device at the time, the lack of hardware shutter button, capacitive buttons and LED flash indicated that this mystery phone was likely an Asha device intended for emerging markets or budget-minded users. Yet, if a report from The Verge's Tom Warren is accurate, there may actually be a lot more to the Normandy than what we had originally assumed. Warren has checked with multiple sources who claim that the phone is an Android-based device due for a 2014 release.

This may seem like a stretch, given the fact that Nokia's device division is currently awaiting an acquisition with Microsoft, but Warren offers a few points of clarification. First, he says, the Normandy is meant to be a low-end Asha equivalent that features a forked version of Android that isn't associated with Google services, which means Nokia would be able to fully customize it however it wants, much like Amazon does with its Kindle Fire. Doing this would still give Nokia full control over the device ecosystem, while giving users the chance to enjoy full smartphone apps -- something the company has had a difficult time figuring out how to do on the Asha line. The question is, would Nokia rely on a third-party app store or try to set up one of its very own? That's still an unknown, but this is assuming the Normandy even sees the light of day; if the rumor is true, our guess is that this project was already underway before Microsoft's acquisition, and will probably be released before the merger is complete -- if it gets released at all.

In this article: android, asha, forked, google, microsoft, mobilepostcross, nokia, nokia normandy, nokianormandy, normandy
All products recommended by Engadget are selected by our editorial team, independent of our parent company. Some of our stories include affiliate links. If you buy something through one of these links, we may earn an affiliate commission.