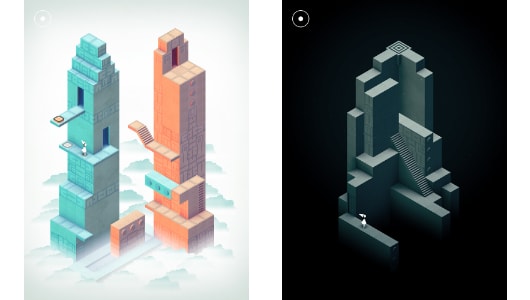 Monument Valley is an optical illusion presented as a game – or a game presented as an optical illusion – starring Princess Ida as she travels alone, seeking forgiveness for a past misdeed. The levels twist and turn to create impossible pathways and shapes, allowing Ida to travel where she needs to go. It's due out on mobile devices "soon" from indie developer ustwo, and beta registration is live now directly through the studio.

Ustwo's past work includes mobile game Whale Trail and a handheld game with a murky history called Papa Quash. Ustwo pulled Papa Quash from the App Store last year following a cloning controversy – the game was commissioned by a third party to play like JS Joust, but it wasn't sanctioned by that game's creator, Die Gute Fabrik. The air was cleared in May and Die Gute Fabrik Lead Designer Douglas Wilson said he didn't harbor any ill will toward Ustwo.

Monument Valley takes cues from the mind-melting art of MC Escher, with gameplay influences from Zelda and Myst. That sounds like the right kind of inspiration to us.
Via: Indie Games
Source: Monument Valley
In this article: ios, ipad, mc-escher, mobile, monument-valley, ustwo
All products recommended by Engadget are selected by our editorial team, independent of our parent company. Some of our stories include affiliate links. If you buy something through one of these links, we may earn an affiliate commission.