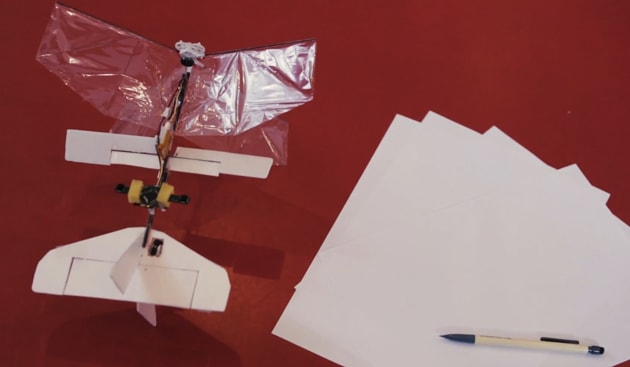 Many robots can fly, but only a few forsake rotors for more natural, if inefficient means of propulsion. These flapping bots have interested folks at the Delft University of Technology for many years, and their latest dragonfly-like effort has achieved what they're calling a first among winged machines: Autonomy. The DelFly Explorer is larger than creations past, but still weighs only 20g (0.7 oz), or the equivalent of roughly four paper airplanes. To flutter freely without human aid, the Explorer marries a barometer and gyroscope with two cameras for eyes, and a microcontroller for a brain. Mix that with some clever coding, and the automaton can take off and navigate its surroundings unassisted until its nine minutes of battery life are up. The DelFly crew imagine their bots could have both fun and functional uses in the future, but for now are busy adding multi-room navigation. At which point, DelFlies will be the perfect scouts for Google's terrifying robot army.

Via: Robohub
Source: DelFly
In this article: autonomous, delfly, delflyexplorer, dragonfly, drone, insect, mav, MicroAirVehicle, robot, TechnicalUniversityOfDelft
All products recommended by Engadget are selected by our editorial team, independent of our parent company. Some of our stories include affiliate links. If you buy something through one of these links, we may earn an affiliate commission.