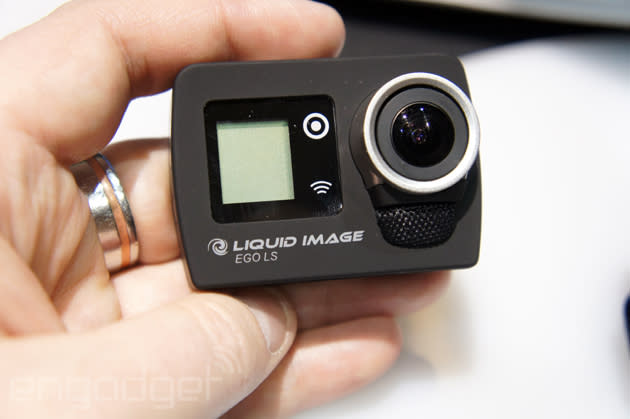 Liquid Image revealed its 4G LTE Ego LS action cam just hours ago, so we made a dash to take a look for ourselves. In terms of size, the LS is a bit smaller than the popular GoPro cams, but there's no built-in battery and the 1,900mAh cell nearly doubles the thickness of the unit. It's wrapped in a rather dapper matte black soft-touch coating that gives the gadget a nice feel. On the face, there's a display for keeping tabs complete with a red recording light and connectivity indicators. There's a play button up top, with power and connectivity buttons (the cam has both WiFi and Bluetooth options) around to the side. The requisite ports for HDMI, microSD card, USB and connecting to either the aforementioned battery or the 4G LTE module lie on the bottom edge.

Meanwhile, Liquid Image has partnered with Verizon for the cellular connectivity bit, which comes at the hands of a clip-in accessory complete with its own 1,900mAh battery to power the streaming. That LTE module will set you back an additional $199 on top of the 200 bones that Ego LS costs on its own and nearly doubles the size (we're talking width here) of the action cam alone. For a look at the whole lot, there's a quick video walkthrough just past the break. In this article: 4g, actioncam, actioncamera, camera, ces2014, egols, hands-on, liquidimage, lte, video
All products recommended by Engadget are selected by our editorial team, independent of our parent company. Some of our stories include affiliate links. If you buy something through one of these links, we may earn an affiliate commission.