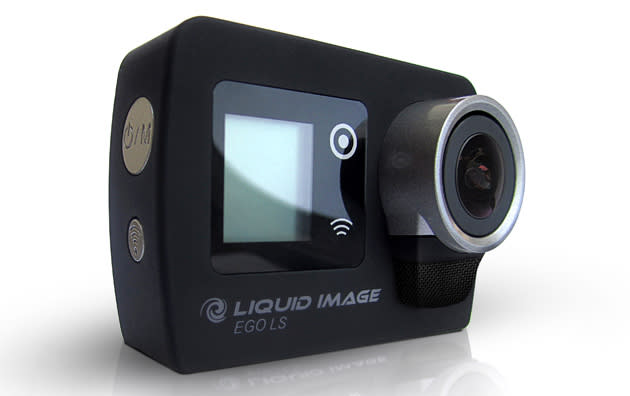 Snowy mountaintops and sheer dirt tracks are just a couple of locations fitting for an epic action cam segment, but they're not places you're likely to find a good WiFi connection. Without putting extra hardware at significant risk of destruction, livestreaming just hasn't been possible in many desirable situations. At CES, however, Liquid Image is mixing things up with the introduction of its new Ego LS camera, which we believe is the first to feature LTE connectivity. It's capable of transmitting WQVGA (400 x 240; bummer) video at 30 fps for up to two hours, or still images over 4G. Otherwise, the 8-megapixel cam has WiFi, Bluetooth, and can partner with iOS and Android devices via the Liquid Image app like the outfit's other models. A microSD slot supporting up to 64GB cards keeps you recording at 1080p/30 fps or 720p/60 fps while disconnected, and like other members in the Ego line, it'll be accompanied by various mounts. Two variants of the Ego LS, both with new motion detection and continuous-photo modes, but one with LTE and one without, are slated to launch in June this year with an estimated price tag of $200.

In this article: 4g, 4glte, actioncam, actioncamera, ces, ces2014, egols, liquidimage, lte
All products recommended by Engadget are selected by our editorial team, independent of our parent company. Some of our stories include affiliate links. If you buy something through one of these links, we may earn an affiliate commission.