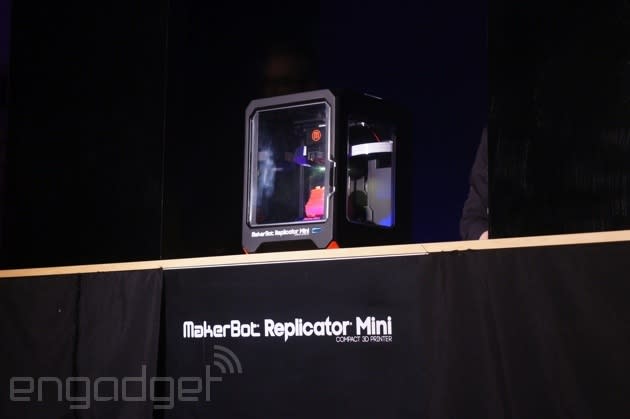 When MakerBot CEO Bre Pettis hit the CES stage today, he was joined by three tall, somewhat ominous black boxes (along with, strangely, acoustic versions of Goo Goo Dolls and Stone Temple Pilots hits). After reminiscing about just how far the company has come in its past five CES appearances, the big unveiling commenced. The first box in the middle was the Replicator Mini. The printer, Pettis noted, is roughly the same size as the company's original Cupcake printer -- albeit a lot more powerful. It's also much more user-friendly, with a single-button experience. "If I was announcing cameras today," he added, "this would be the point-and-shoot." Pettis added that the printer has been "years in the making," getting the device "just how we wanted it." The Mini works with PLA and has built-in WiFi, so you can connect it directly to your devices for printing.

There's also, interestingly, an on-board camera, which offers up print monitoring with photos you can share with your social networks via the aforementioned WiFi. Inside, you'll find a "Smart Extruder," which snaps on and off magnetically, for easier filament loading. And when it runs out of plastic, the printing just pauses. The printer will run $1,375 when it starts shipping in spring of this year. 11
In this article: 3d printer, CES 2014, MakerBot, replicator mini
All products recommended by Engadget are selected by our editorial team, independent of our parent company. Some of our stories include affiliate links. If you buy something through one of these links, we may earn an affiliate commission.