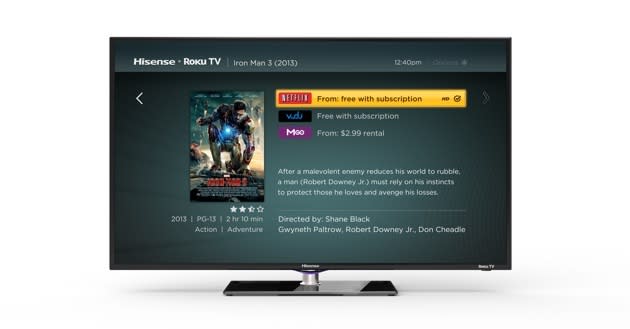 Up until now, Roku's bid for the living room has mainly come in the form of its puck-like streaming players and sticks. These devices, priced at below $100, are a cheap way for consumers to augment existing HDTVs and make them "smarter." But now Roku's getting into the TV hardware business directly. It's partnered up with six manufacturers, of which Hisense and TCL are the first to be announced, to produce a line of Roku TVs that come pre-loaded with the company's streaming software. These sets aren't planned to hit retail until sometime later this fall, but at CES 2014, we'll be getting a first look at what's in store. Roku's shift from a provider of streaming players to that of branded TVs isn't as far-reaching as it sounds. The company's aiming to leverage its streaming software as a smart TV platform; something to license out to TV manufacturers that can't compete with the handful of vertically integrated titans like Samsung, Apple and LG. In other words, Roku wants to supply the brains of the set and leave the design particulars mostly up to its partners.

As Jim Funk, the company's SVP of Product Management, put it, Roku's seeking to make a "TV for the way TVs are used by people today." That is, a hassle-free, streaming-ready set that does away with the need for extraneous dongles, players or video game consoles. It's ironic considering the company built itself on such peripherals, but you can't fault Roku for accepting the inevitable. As consumer reliance on streaming becomes more and more the norm, so too will the availability of streaming-ready sets. Streaming peripherals are very nearly a thing of the past.

In keeping with its emphasis on simplicity, Roku TV's UI is staying mostly unchanged from what's running on current-gen products. So you'll still find a navigable grid of streaming providers and browsable categories, but you won't find any web browser or guide overlay for cable when you turn these sets on. That said, inputs for Blu-ray players, gaming consoles and cable boxes will all be present from atop the UI, making switching between devices far simpler.

For the first run, Roku TVs will arrive in a range of sizes from 32 to 55 inches and feature the company's branding on the bezel. It's not yet known if any of these initial Roku TV sets will ship with remotes capable of audio output, though they should look similar to the current setup. Design decisions like those, it seems, are entirely up to each manufacturing partner. So far, Roku's only named TCL and Hisense as two of its six set-makers, but further partner announcements, as well as details on pricing, are planned for later this year.

In this article: ces2014, hdpostcross, Hisense, Roku, roku tvs, RokuTV, rokutvs, streaming, streamingready, TCL
All products recommended by Engadget are selected by our editorial team, independent of our parent company. Some of our stories include affiliate links. If you buy something through one of these links, we may earn an affiliate commission.