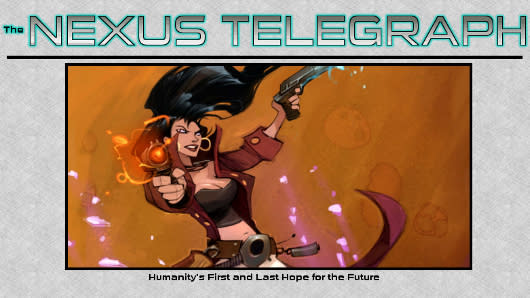 Imagine, for a moment, that your self-esteem has been validated completely by an external force. In fact, let's turn that up a little more -- let's say it's been validated by every single person you've ever idolized. Imagine that they all showed up at your front door and said you were awesome and that if you would just give them your cat, you would be granted a marvelous dominion over everything.

First of all, it would be time to say goodbye to the cat. Second, it would mean that from that moment on, your future actions would all be entirely validated no matter what you did. Seriously, how could it ever be otherwise? Every authority you respect came around to tell you that you are supremely awesome, and you are apparently the last person any of them talked to.

This should give you the barest hint of what it's like to be one of the Cassians in WildStar. You are born into greatness, into a legacy of being the greatest thing ever, and you don't just have to live up to that legacy -- you have to outdo it. The point cannot be stressed enough that whether or not you like the Dominion, as far as the upper leadership is concerned, what citizens of the Dominion are doing is helping everyone. Absolutely nothing the Dominion has ever done has been done out of malice. It's always justified by the needs of the galaxy as a whole, even if sometimes that means being nasty in the short term.

Look at the Granok. They were offered a place in the Dominion, and how did they respond? Violently. Can you imagine what would have happened if they were allowed to roam the galaxy? They would be criminals, mercenaries, thugs for hire, dangerous to everyone, quite probably in league with terrorists and pirates. You know, exactly what happened with the exiled Granok.

Look at the Mordesh. How communicable was their plague? How could you pick out the infected? How was there any way to know that Lazarin didn't plan on this the whole time? No, it's best to block off the planet and make sure that the illness is contained rather than hurting anyone else. And the Aurin? Aiding known terrorists. You can't let that sort of thing go without retribution; that just encourages more terrorist behavior, doesn't it?

No one would argue that any of this was nice, but you don't always get to operate based on nice. When you're trying to build a stable galactic empire that makes the galaxy better for everyone, you're going to occasionally wind up excising some parts. It's unpleasant, maybe even heartbreaking, but it's the necessity.

This is why it's so easy to say that the Dominion is evil or villainous: It's a faction willing to go to extremes. The Dominion is Ozymandias, Lex Luthor, the Borg, SHODAN, Garrosh Hellscream -- any character or group willing to go to any length for what is perceived as the greater good. What's missing is the fact that it's also the faction of martyrdom, of self-sacrifice, of giving up everything in pursuit of an ideal bigger than yourself. It would be wrong to say that the Dominion aren't hunting the Exiles, but they're doing so because the Exiles have attacked the Dominion. Do you want to wager how many of those attacks were against civilian targets? And the Dominion as a whole does not spend all of its time and effort trying to kill as many Exiles as possible. It's a duty that must be fulfilled, but it comes only as part and parcel of a much larger task handed down by the Eldan. The Cassians are there to cultivate the galaxy for their benefactors.

We don't know how well they're doing, on a whole, but it can be assumed that it goes reasonably well. I imagine that for the vast majority of Dominion members, life is comfortable. It's comfortable both morally and physically; after all, you know you have the higher powers on your side, so why fuss over moral questions? You are right.

The Dominion has religion, it has rituals, it has a drive to do better, always. The Cassians aren't meant to be the lords ruling over the lesser races like the Draken from on high; they're meant to embody the ideals that they claim the Dominion stands for. Being a Cassian isn't a matter of being inherently better; it's a call to better yourself and others in the name of improving the entire galaxy.

Except you have to wonder whether or not you are making the galaxy a better place.

Herein lies the central conflict of the Cassians. As a species, as a culture, as a race, the Cassians have marched on under the banner of what they are relatively certain needs to be done to fulfill orders given out several generations before. And it's difficult. It's required the Cassians to sacrifice a great deal, including some of their own people (the Exiles are as good as sacrificed, at least). And all of this has been in service to an ideal.

What if the Eldan don't live up to that ideal? Worse yet, what if they don't actually care? Let's return to that that thought experiment from the beginning of the column: What if it turns out that all those people telling you that you were awesome really just wanted your cat and to see how badly you'd screw things up if you were in charge?

If you believe you have a moral imperative, what do you do when you have to start questioning whether or not that imperative is valid?

As always, feedback is welcome in both the comments or via mail to eliot@massively.com. Next week, I'm tackling an elephant sitting right in the middle of the living room. The week after that? Exiles, obviously.

In this article: backstory, carbine, carbine-studios, column, culture, featured, lore, ncsoft, nexus, nexus-telegraph, opinion, race, races, sandpark, sci-fantasy, sci-fi, speculation, the-nexus-telegraph, wildstar
All products recommended by Engadget are selected by our editorial team, independent of our parent company. Some of our stories include affiliate links. If you buy something through one of these links, we may earn an affiliate commission.