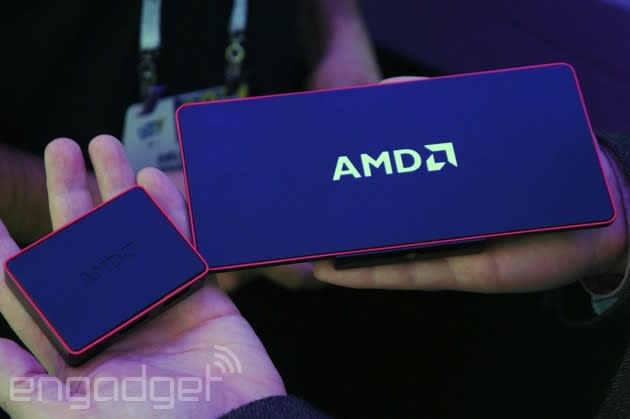 Let's take a moment to forget the technical nonsense. Seriously. Besides, we only really know the broad strokes about Mullins, AMD's next-gen ultra-low voltage APU. Instead, let's just gaze upon the tiny wonder that is the Nano PC for a bit and soak it all in. This reference design from the Sunnyvale company packs enough power to run Windows 8.1 pretty seamlessly and even get in a quick game of FIFA 14 at 1080p. Inside, in addition to a Mullins chip, is a 256GB SSD, a camera, Bluetooth, WiFI and a DockPort connector. And, it's really not much larger or thicker than a Note 3 -- it's pretty much a marvel of engineering. It's the last of those specs that's pretty important, since it allows you to connect to a tiny breakout box with HDMI and USB ports. Obviously you'll need one of those to connect it to a TV, which the Nano PC is designed to sit atop. Here's hoping that a company or two picks up on the design and starts making absurdly thin machines of their own. In this article: amd, apu, ces, ces2014, dockport, mullins, nanopc
All products recommended by Engadget are selected by our editorial team, independent of our parent company. Some of our stories include affiliate links. If you buy something through one of these links, we may earn an affiliate commission.