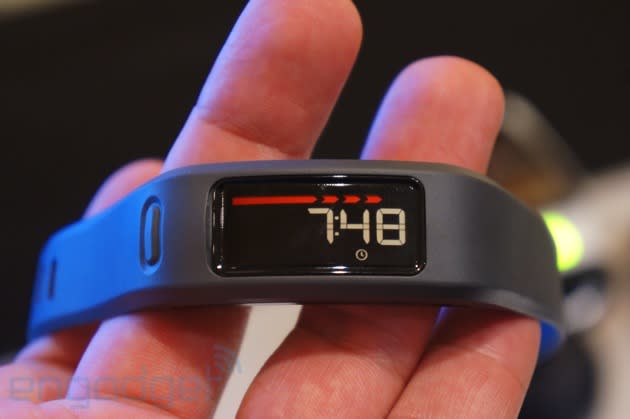 We got details for Garmin's Fitbit competitor, the Vivofit, earlier today and now we've had a chance to wrap the thing around our dainty wrists. Garmin tells us the fitness tracker/watch that tells you when you've been lazy has an always-on display with a battery that won't require frequent recharging. With its rubber exterior and simple band design, it's not going to stand out at a glance, but the curved display does offer a bit more screen real estate than most and makes for a comfortable fit. It's relatively inconspicuous, but like just about every other fitness tracker, we wouldn't be caught dead wearing this thing at the opera. While Garmin's promising better battery life than other fitness trackers, a company rep tells us that it won't be compatible with Android or iOS devices to start -- instead allowing "one-touch" uploads of your stats to the online Garmin Community app. Update: Garmin reached out to let us know that compatible Android and iOS apps will be released for the Vivofit.

In this article: ces2014, fitness, fitness tracker, garmin, health, vivofit
All products recommended by Engadget are selected by our editorial team, independent of our parent company. Some of our stories include affiliate links. If you buy something through one of these links, we may earn an affiliate commission.