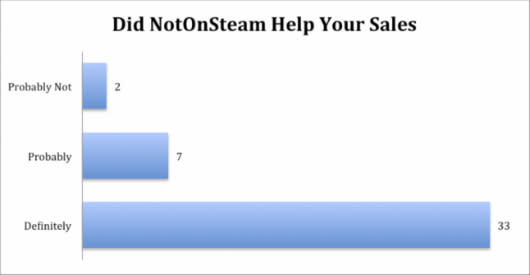 The Not on Steam Sale launched in October and lasted one week, offering up to 50 percent off a lineup of games that weren't on Steam (at launch, at least – that day, three games were Greenlit). By the sale's close, it hosted 63 games, and just 10 of them weren't even attempting to land on Steam. Since the sale, 23 of the games attempting to hit Steam were Greenlit, and 10 of those have launched on Steam.

The stats come from indie consultant Mike Kanarek in his Not on Steam Sale postmortem. Kanarek estimates the sale sold 13,500 copies and added 42,000 Greenlight votes to participating games. He calls the sale an "amplifier," not a permanent fix.

"Not on Steam did not make anyone fabulously wealthy," he says. "Our top sellers (or top Greenlight vote-getters) sold fewer than 2,000 games apiece (with an average of about 200) and may have added as many as 3,000 votes on Greenlight (with an average of about 700) through Not on Steam. In general most games fell well below these averages with a few big sellers and vote-getters pulling the average way up. Most games got a modest but respectable sales and vote increase, and a handful did enormously well."

Three of the five lowest-selling games in the sale weren't on Greenlight and had no intention of entering Steam, while the top 20 best-sellers were all on Greenlight.

"This suggests that a presence on Greenlight in some way encourages sales, even off of Steam," Kanarek says. "It's impossible to say whether it's because Greenlight acts to increase discovery and awareness of these games, or if there are people who simply take a game more seriously if it's on Greenlight." Check out Kanarek's full postmortem (complete with graphs!) here.
In this article: greenlight, Indie, mac, not-on-steam-sale, pc, sale, STEAM, steam-greenlight
All products recommended by Engadget are selected by our editorial team, independent of our parent company. Some of our stories include affiliate links. If you buy something through one of these links, we may earn an affiliate commission.