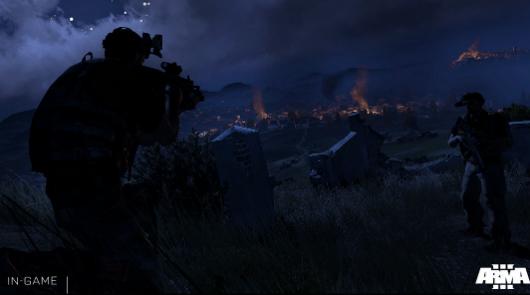 'Adapt,' the second mission in Arma 3's official campaign dubbed 'The East Wind' has arrived. Launching on Tuesday, 'Adapt' puts players in the role of a soldier trapped on the island of Altis following a tumultuous event in the Mediterranean.

"While the first part of the campaign introduced players to Arma 3's basic infantry combat and story, episode two opens up the military sandbox further, challenging players to adopt guerrilla tactics in the face of against a stronger, better-equipped enemy," an announcement on developer Bohemia Interactive's website notes. The mission is available for free to owners of the game, and will be added to the Arma 3 via a Steam update.

Arma 3 is a gorgeous, highly-moddable and unforgiving military shooter for PC. The series helped birth the popular DayZ mod and, perhaps most infamously, raised political tensions in Europe when two of its developers were detained by authorities in Greece on suspicion of espionage.
In this article: arma-3, Bohemia-Interactive, pc, The-East-Wind
All products recommended by Engadget are selected by our editorial team, independent of our parent company. Some of our stories include affiliate links. If you buy something through one of these links, we may earn an affiliate commission.