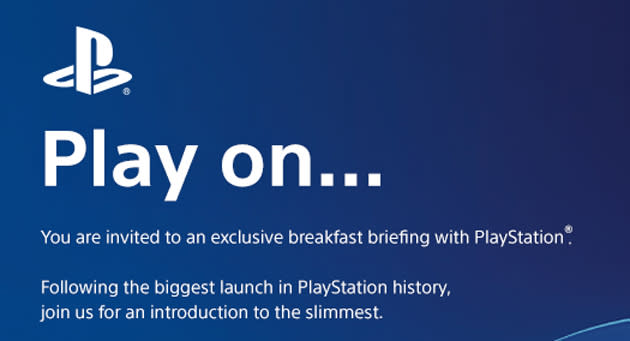 We've had a lucky run with product teasers recently. Instead of being totally vague, they've deliberately given us some inkling of what to expect, and we're hoping that the Sony flyer above -- summoning us to a PlayStation event in London -- does so too. We're told the briefing will introduce UK journalists to the "slimmest" PlayStation device, but we're not told that we're definitely going to witness the launch of a whole new product, which -- to our minds, at least -- suggests we might be looking at the UK launch of the PlayStation Vita TV. At just 13.6mm thick, the Vita TV is the thinnest PS device that we know of and it's currently only available in Japan, so a launch in the UK (or anywhere outside of Asia) could potentially be a big deal. We're gonna go ahead and rule out a super slim PlayStation 4 already, but the other plausible alternative is that the flyer is technically wrong, and that this is the UK launch of the slimmer version of the PlayStation Vita handheld -- in other words, the 2013 Japanese model, which has an LCD screen instead of OLED, better battery life and which is just 15mm thick (20 percent skinnier than the current UK model). In any case, we'll be there at the event on January 30th, with a flask of coffee and a pair of calipers.

In this article: console, gaming, playstation, sony, teaser, vita, vitatv
All products recommended by Engadget are selected by our editorial team, independent of our parent company. Some of our stories include affiliate links. If you buy something through one of these links, we may earn an affiliate commission.