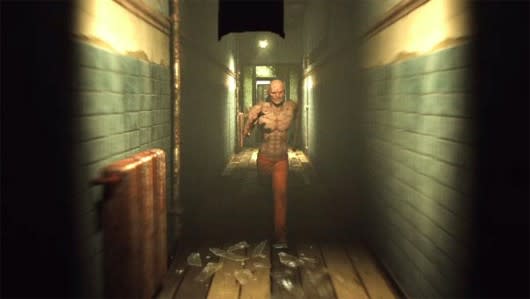 Just a quickie here, since it was all but confirmed: The institutionalized scares of Outlast are freaking out the PS4 next week, according to this week's Blogcast. PlayStation Europe already had Red Barrels' horror lined up for next week, but Sony's podcast confirms the same for North America, barring the PS Blog's formalities that "PSN game release dates are subject to change without notice." Cling onto that formality while you still can.

Outlast left us wanting to stop playing it over and over when it hit PC last year, with Joystiq's normally unflinching Jess Conditt saying, "Those moments when the stress of running and hiding and worrying about every single little sound become too much, and the paranoia eats away at your sanity until you feel trapped. You want to quit – to escape – but you can't, because you have to get out of the asylum, to see it through to the end."

Outlast will be available free to PS Plus subscribers as part of next month's line-up: North America also get Metro: Last Light, Modnation Racers: Road Trip, Street Fighter X Tekken (on Vita), Remember Me, and Payday 2. Europe swaps out those last three for BioShock Infinite and Dynasty Warriors Next.
In this article: outlast, playstation, ps4, psn, red-barrels, release-date, Sony-Computer-Entertainment
All products recommended by Engadget are selected by our editorial team, independent of our parent company. Some of our stories include affiliate links. If you buy something through one of these links, we may earn an affiliate commission.