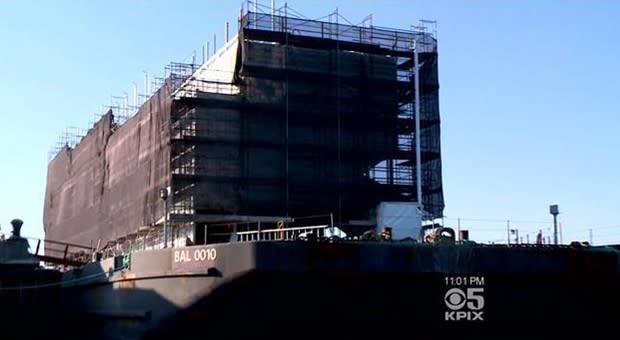 Sure, Google's so-called mystery barge is a little less, well, mysterious now that we know it's meant to be "an interactive space where people can learn about new technology," but the tale of its creation continues the theme of intrigue. After receiving complaints about the craft's construction, the San Francisco Bay Conservation and Development Commission looked into Mountain View's project and discovered that the proper paperwork wasn't in order. As it turns out, the city of San Francisco nor the Treasure Island Development Authority, which gave Google the green light to set up shop in the bay, had applied for the permits necessary to let work begin at the raft's current location. According to Larry Goldzband, the commission's executive director, Page and Co. must move the vessel, and sending it to a permitted construction spot in the bay would do just fine. The future might not be as rosy for the Treasure Island Development Authority, however, as Goldzband says they could face fines and enforcement proceedings for stepping out of line.

This isn't the first time Google's float has had a run in with government officials either. Last fall, the US Coast Guard inspected the watercraft and seems to have suggested some design changes. The paperwork blunder likely won't mean much for the barge in the long term, but we've reached out to Google for word on how they'll adjust to the troubles.

Update: Google's chimed in to let us know it's still digesting the permit news: "We just received the letter from the San Francisco Bay Conservation and Development Commission and we are reviewing it."

In this article: barge, google, GoogleBarge
All products recommended by Engadget are selected by our editorial team, independent of our parent company. Some of our stories include affiliate links. If you buy something through one of these links, we may earn an affiliate commission.