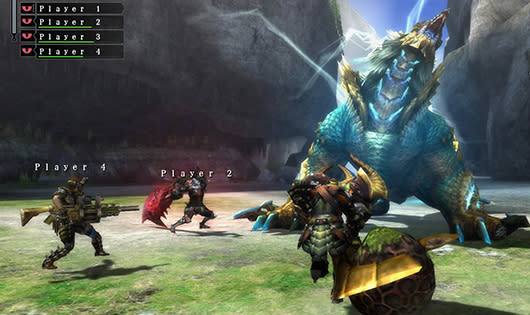 Slaying giant beasts on your 3DS is all well and good, but if you want to meet the creatures of Capcom's Monster Hunter franchise face to face, you're going to need a plane ticket to Osaka.

There, at Universal Studios Japan, you'll find a new Monster Hunter-themed attraction dubbed "Monster Hunter The Real." The event runs through May 11 and includes shops selling food and drink modeled after items found in the game, as well as a display where you can view real-world mockups of the game's various weapons and sets of armor. As you'd expect, the real draw of the exhibit is its gigantic beasts. That video you see above was captured by YouTube user "ExorcistPlexLife" during a 2012 incarnation of the event, and it depicts an animatronic Gold Rathian looking far more sedate than the last time he crushed you into a fine paste.

More details on Monster Hunter The Real are available at 4Gamer, though if you don't read Japanese you'll have to settle for gawking at a few dozen recent images of the event.
[Image: Capcom]
In this article: 3ds, capcom, japan, monster-hunter, monster-hunter-4, nintendo, theme-park, universal-studios, universal-studios-japan
All products recommended by Engadget are selected by our editorial team, independent of our parent company. Some of our stories include affiliate links. If you buy something through one of these links, we may earn an affiliate commission.