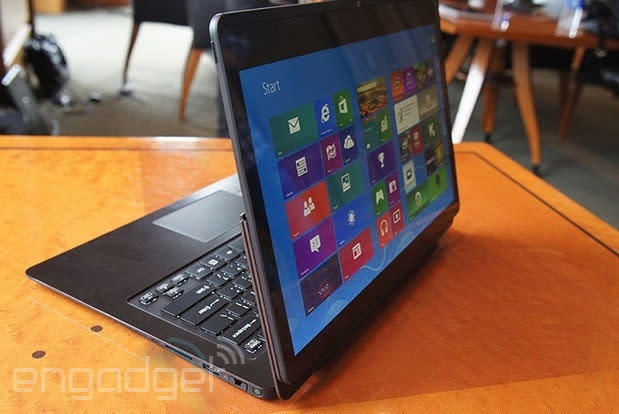 Sony said it was "addressing various options" as recently as yesterday when it came to its VAIO PC and laptop arm, and while announcing its financial results for Q3 2013, it's apparently come to a decision. Amid reforming its TV arm (and splitting it into a standalone entity by June 2014), it's going to sell its PC business and VAIO brand to Japan Industrial Partners (JIP), with the final deal set to be done by the end of March 2014. The company has reported a drop in demand for its PCs in prior financial statements, and (barring the VAIO Flip 11A), Sony didn't really have much to show from its VAIO range at this year's CES. During the earnings call today, CEO Kaz Hirai said that it was an "agonizing decision", and that it was "a very Sony brand... It stirred up the PC market."

The company says it's no longer designing and developing PC products, while manufacturing and sales will wrap up after the company's final VAIO range goes on sale globally. It has decided to focus on those post-PC products (yep, smartphones and tablets), meaning that it had to make some big decisions with less successful parts of the business. During Q3 2013, it saw "significant profit improvements" compared to the same period last year. Sony saw year-on-year sales increases from its mobile arm, but still forecasts an annual loss of around $1.1 billion (110 billion yen) for the full year: it had previously projected a 30 billion yen profit. The blame is leveled at the businesses its now looking to change. Other highlights include the PS4, which sold 4.2 million units and 9.7 million games in its first six weeks. The games arm also saw a "dramatic increase" in PlayStation Plus subscriptions -- something that's mandatory for multiplayer on the company's new console.

Sony will cut a total of 5,000 jobs worldwide (1,500 in Japan) by the end of the 2014 fiscal year, while the new PC company has stated that it will hire around 250 to 300 Sony employees, encompassing design, development manufacturing and sales, and will be based in Nagano -- where Sony's current VAIO HQ resides. The company is promising to fulfill all its aftercare warranties. Sony is signed up to invest 5 percent of the new company's capital to support its launch and smooth over the transition. Restructuring costs across both the TV and PC segments are now set to cost an extra 20 billion yen. Sony is now set to focus on its high-end sets and 4K screens, and hopes that changes will ensure the TV business returns to profitability within the next financial year.

In this article: hdpostcross, mobilepostcross, pc, poll, sale, sony, vaio, wedgies
All products recommended by Engadget are selected by our editorial team, independent of our parent company. Some of our stories include affiliate links. If you buy something through one of these links, we may earn an affiliate commission.