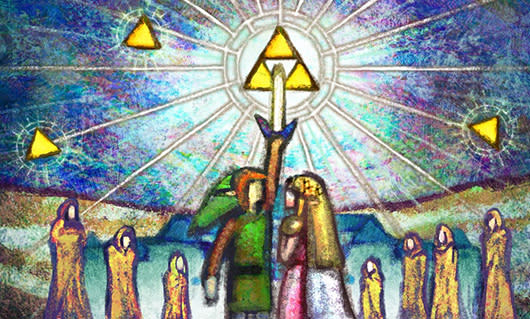 In its most recent entry, PBS' Game/Show YouTube series wonders if Nintendo's beloved Legend of Zelda series is only so beloved due to an incessant reliance on player nostalgia.

While Game/Show doesn't offer an answer to this question – the series is aimed at prompting discussion, not taking any one stance – the points it makes are intriguing. How many of you are immediately transported to the gleeful whimsy of childhood on hearing the Legend of Zelda overworld theme? How often have we seen new entries in the series directly reference prior games, much to the delight of fans? How many times can players explore the Lost Woods before the cartographers of Hyrule finally decide maybe that mysterious grove of trees isn't so lost after all?

Watch the above footage, take in its arguments, then post your own thoughts in the comments below.
[Image: Nintendo]
In this article: hyrule, link, nostalgia, pbs-gameshow, the-legend-of-zelda, the-legend-of-zelda-a-link-between-worlds, zelda
All products recommended by Engadget are selected by our editorial team, independent of our parent company. Some of our stories include affiliate links. If you buy something through one of these links, we may earn an affiliate commission.