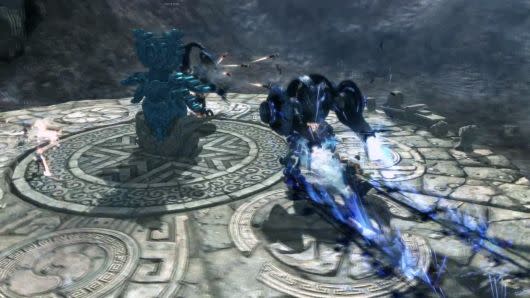 NCSoft has released a new video featuring the latest addition coming to Blade & Soul Korea: a combination PvE and PvP zone appropriately named Hell. While you won't find any lakes of fire in this incarnation of Hell (they're more like puddles), you better believe there's going to be plenty of weeping and gnashing of teeth as players in the zone have to contend with the usual unholy abominations, malicious demons, missile-barrage-firing mechs (yes, really), and of course, nefarious schemes of opposing players. The full video features nearly seven minutes of shiny, explosive, and occasionally bizarre PvE and PvP combat throughout the new zone. They say diplomacy is the art of telling someone to go to hell in such a way that he looks forward to the trip, so if you're curious about how diplomatic NCSoft can be, click on past the cut for the full trailer.

In this article: blade-and-soul, bns, hell, korea, ncsoft, patch, patches, player-vs-player, pvp, update, updates, zone, zones
All products recommended by Engadget are selected by our editorial team, independent of our parent company. Some of our stories include affiliate links. If you buy something through one of these links, we may earn an affiliate commission.