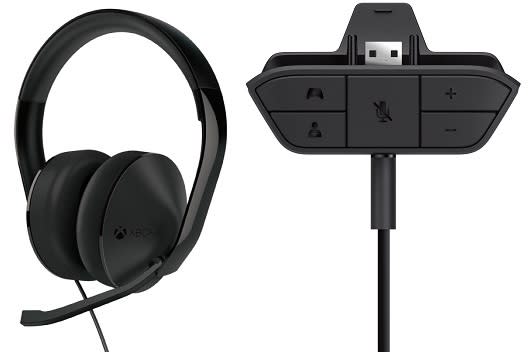 Microsoft is releasing the Xbox One Stereo Headset Adapter worldwide in early March, bringing support to third-party headsets including compatible Xbox 360 ones. The $25 adapter plugs into the controller, and connects to headsets to enable chat audio. Game audio is added in by connecting the headset to the Xbox One with an optical cable, or to the TV via RCA cables. The adapter itself features volume controls to adjust chat levels and the option to mute the headset's microphone.

Arriving alongside the adapter is Microsoft's own $80 Stereo Headset, which promises "a premium audio experience for both game and chat audio." It offers full range audio, a unidirectional microphone, and over-the-ear speakers, and ships with the adapter included.

There's no news in today's announcement on Dolby Digital support, which isn't universally available for Xbox One headsets. Last we heard, support was coming via a future update.
[Image: Microsoft]
In this article: microsoft, release-date, xbox-one, xbox-one-headset, xbox-one-stereo-headset, xbox-one-stereo-headset-adapter
All products recommended by Engadget are selected by our editorial team, independent of our parent company. Some of our stories include affiliate links. If you buy something through one of these links, we may earn an affiliate commission.