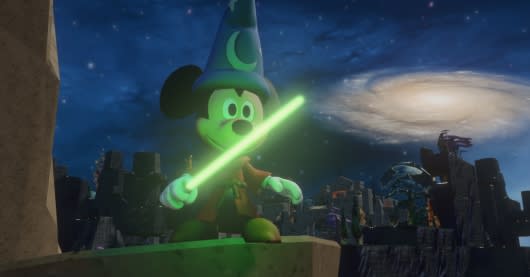 Disney Interactive may have passed up the opportunity to produce Star Wars-licensed games in favor of developing Disney Infinity, but that doesn't mean The Force is completely absent from the studio's toy-collection game. The Disney Infinity Fans community has uncovered a green lightsaber weapon hidden in the game.

The lightsaber, according to a video posted by "Sheriff Woody," is given as a reward to players who collect every character in the game. Sheriff Woody got his hands on Phineas and Agent P - the two figures yet to be released in stores - and was able to complete his collection early, hence the reveal.

The Force is strong with this one.
[Image: Disney]
In this article: 3ds, ios, ipad, iphone, lightsaber, microsoft, mobile, nintendo, playstation, ps3, star-wars, wii, wii-u, xbox
All products recommended by Engadget are selected by our editorial team, independent of our parent company. Some of our stories include affiliate links. If you buy something through one of these links, we may earn an affiliate commission.