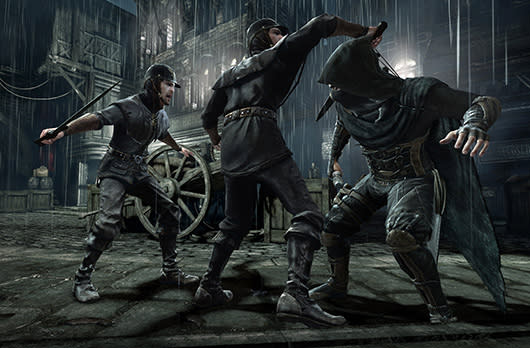 When Thief debuts on February 25, the PlayStation 4 incarnation of the stealth-action game will feature graphics at 1080p resolution, while its Xbox One counterpart will offer 900p imagery.

This disparity was revealed by Square Enix in a recent chat with Eurogamer, though the publisher claims that the difference is not glaring. "You really need good eyes to see the difference," said Thief director Nicolas Cantin, before adding that the Xbox One game "is as good as the PS4 version." The big difference, Cantin claims, is found between the older generation of consoles and these newer machines. "We put more detail in, more special effects. But at the same time, we kept the same gameplay experience with the current-gen and the next-gen versions."

Thief is only the most recent example of a big release offering higher resolution graphics on the PlayStation 4. Metal Gear Solid 5: Ground Zeroes will reportedly run at 1080p on PlayStation 4 and at 720p on Xbox One, while the PS4 version of Call of Duty: Ghosts received a launch day patch to bump its graphics up to 1080p.
[Image: Square Enix]
In this article: eidos-montreal, microsoft, playstation, ps4, sony, square-enix, thief-2014, thief-4, xbox-one
All products recommended by Engadget are selected by our editorial team, independent of our parent company. Some of our stories include affiliate links. If you buy something through one of these links, we may earn an affiliate commission.