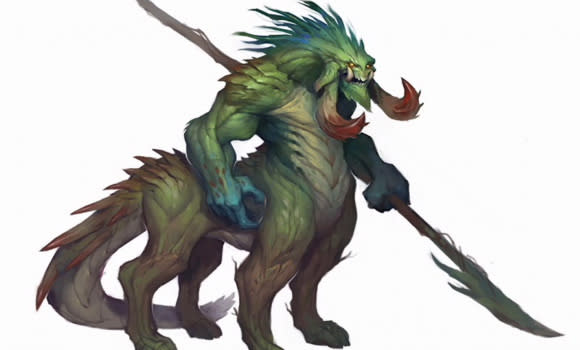 Draenor, like Azeroth, is populated by more than just one sapient people. We've talked at length about the orcs who were born on Draenor, and the draenei who landed there and named the world as their refuge. But there were others. Some have vanished entirely since the creation of Outland, while others escaped to Azeroth or continued to exist on the remnant continent itself, floating in the Twisting Nether.

Thus, our trip to this new Draenor will allow us to come face to face with beings we barely know, as they were before the destruction Ner'zhul unleashed, and with beings we've never met or seen, entities of legend. While we still don't know exactly what we'll find on Draenor (I'm sure it will be savage) we have enough clues to start talking about the denizens of that unknown (to us) world.

So, who were these others?

The ancestry of the ogres of Draenor is a convoluted, tangled thing. For starters, there are the gronn - massive giants, themselves said to be descended from 'earth giants' (known as grom in orcish) and who play a large role (both figuratively and literally) in ogre history. Some sources argue that the ogres are directly descended from gronn, others that the gronn merely enslaved them - either way, the gronn have left a legacy on the ogres, a legacy of enslavement and beatings that embittered the ogres against the gronn. As massive as the gronn are, the grom were far, far larger, so large that a fortress could easily be established inside their remains. The image above illustrates this, as a grom's skeleton in the Frostfire Ridge serves as an adequate shelter for multiple beings.

The ogres in Warlords of Draenor appear to have established at some point a culture of their own, one that is descending into decadence as the Iron Horde rises. As the Iron Horde has managed to go so far as to enslave various gronn to serve as siege engines, it's possible that the ogres have turned on their erstwhile self proclaimed demigods, as they did in our history, and allied themselves with the Iron Horde in exchange for weapons and support against their former masters. The ogre empire seems to originate in the continent to the south of the Draenor we know. There are other mysteries to the ogre people and their history. We know of the ettin, primitive and brutish giant beings with aspects of ogre physiology (they share the ogre tendency of double headedness) - will we see ettin on Draenor? Are they considered part of the ogre civilization, are they slaves to the gronn, or do they stand apart? If they original come from the land to the south, why did they come north to the Frostfire Ridge and Gorgrond? What of the grom - were they long extinct by the time of the Warlords, or will we encounter one of these terrifying giants?

Another race to consider in all this is one that you might not expect. On Outland, an offshoot of the ogres was fighting to free its people from gronn domination. They called themselves the Ogri'la, claiming that they had found enlightenment by studying artifacts known as the Apexis Crystals. But the Apexis were not created by ogres at all. These powerful crystals were the work of a long vanished civilization of arakkoa.

The fury of the Arakkoa

The arakkoa we know are the merest remnant of a society unfathomably old. The arakkoa once existed in such numbers that they ranged from the Frostfire Ridge and Gorgrond to the north to the Spires of Arak to the south - as of the time of Warlords, they seem to endure primarily in the Spires that bear their name. And what we know of this ancient civilization is very, very little.

For starters, we know practically nothing of the lost Apexis civilization. We know that the crystal artifacts they left behind uplifted a group of ogres in our timeline, and created a resource war over said crystals between agents of the Burning Legion, the Etherals and the ogres. How the arakkoa made the Apexis crystals and to what purpose is lost to history, as is their presence there. We know they were there only by their few remaining works. In Outland, there are several groups of arakkoa in the Blade's Edge Mountains, implying that either Frostfire Ridge or Gorgrond retained some small group of arakkoa culture. Was it descended from the Apexis civilization, or was it an attempt to recolonize the area?

Other regions on Outland that have arakkoa (and thus, the potential for arakkoa cultures in Warlords of Draenor) include Hellfire Peninsula (corresponding to the Tanaan Jungle), Shadowmoon Valley, and Terokkar Forest (Talador). I expect we'll find a forerunner of Skettis in Talador - but with the draenei and Iron Horde engaged in combat in the heartland of draenei civilization, I expect far less of the arakkoa to be present, especially with the Spires of Arak intact to the south. In our timeline, the arakkoa of the Dark Conclave were destroyed by Gul'dan before they could summon an old god into Shadowmoon Valley, but that was a Gul'dan in full control of the Old Horde, and there's much we don't know about them or what they were doing.

We know that the arakkoa are involved with the entity Anzu, that when we arrive on Draenor the arakkoa we encounter will be fully capable of flight, and that their cruelty was even greater (they are said to enjoy snatching up flightless beings and dropping them onto the spires of their homeland to watch them slowly die as a sacrifice to their gods). How the arakkoa culture hero Terokk is involved in any of this is yet unknown. The arakkoa of our time are said to have abandoned the worship of their ancient god Rukhmar for a new, unknown master - which god, if either, do the arakkoa of Warlords of Draenor serve? We have hints that they are sun worshippers, but that doesn't really answer the question.

We have a lot left to learn about the arakkoa. The ogres and arakkoa are at least known to us - we've met them. Ogres have been a staple of the Warcraft setting for years, and we first met the arakkoa during our trip to Outland, back during the Burning Crusade expansion. We may not know everything about them (far, far less in the case of the arakkoa) but we know of them. The next two races are completely new to us - we know very little, if anything, of them.

The first are the saberon. What we know of them is basically that concept art - they're big sabretoothed tiger humanoids. We don't even know their size, much less where they lived or what kind of culture or society they had. Were they nomads, like the orcs? Did they have a settled culture, did they even have a culture as we understand it? At present, we don't know.

Second up are the equally unknown genasaur. We do know that they're said to be similar to magnataurs both in size and in overall body plan. As seen in the concept art at the beginning of the post, the genasaur has an overall reptilian cast, with the lower quarters of some vast reptile quadruped and the upper torso of an equally reptilian giant humanoid. While magnataurs on Azeroth are said to be somehow related to centaurs and keepers of the grove, and thus Cenarius (and please, no one explain that to me) we as yet have no idea about the origin of the genasaur. Are they also the descendants of some preternaturally frisky demigod?

That of course leads us to wonder - does Draenor have its own version of the Ancients of old Kalimdor/August Celestials of Pandaria? Are the saberon the children of a sabretoothed tiger spirit? There were shamans on draenor with ties to wolf spirits among the orcs, which implies that it's possible. But so much of Draenor is lost - we know very little about ogre gods like Nath, the complicated religion of the arakkoa is dimly understood at best, and the orcs seem more animistic than pantheistic - we'll find out as we go, of course, but it does lead one to wonder.

Next week, I may speculate on draenei origins and how we get Eredar and Broken in the same family tree.

While you don't need to have played the previous Warcraft games to enjoy World of Warcraft, a little history goes a long way toward making the game a lot more fun. Dig into even more of the lore and history behind the World of Warcraft in WoW Insider's Guide to Warcraft Lore.
In this article: apexis, arakkoa, ettin, featured, gensaur, grom, gronn, guide, guide-to-lore, lore, lore-guide, ogre, ogres, ogrila, role-play, role-playing-guide, rp-guide, saberon, world-of-warcraft-lore, wow-guide, wow-lore, wow-role-playing, wow-role-playing-guide, wow-rp, wow-rp-guide, wow-rping
All products recommended by Engadget are selected by our editorial team, independent of our parent company. Some of our stories include affiliate links. If you buy something through one of these links, we may earn an affiliate commission.