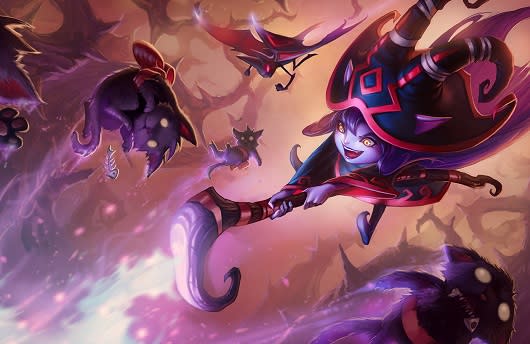 Everyone who plays League of Legends has bad games every now and then. Everyone has bad community experiences, too. I think it's rare to have a game where everything just feels exciting and positive and wonderful all the way through. LoL is really not well-designed for that.

However, it's fear of loss, of playing poorly, and of dealing with jerks that keeps us from actually enjoying the game. Those things are real, but if you let those things get you down, you'll never give yourself a chance to improve.

Two weeks ago, I gave my secret to success in LoL: I'm always trying to improve. Without the desire to improve yourself, you focus too much on the other things in the game like winning, losing, people being jerks, and so on. Focus less on that stuff and more on just playing better.

If your goal is to climb the ranking ladder (and for many of us, that's something we would like), you have to have that goal of improvement. You don't have to jump into ranked right away, but if you're playing normals with the goals of getting better, you'll get to the point where you can skip a fair bit of the ladder grind and place into gold or high silver.

Once you're trying to improve, then just play

The single biggest obstacle to getting better is time. Even if you're not consciously trying to get better, if you put in enough time into something, you'll start to get good at it. Even if you're in Bronze V now, that really doesn't matter. Pick something to start getting good at and play. If you keep at it, you'll get better, and your ranking will improve.

Finding time is hard. I really know how some of you feel here. Logging into LoL and playing a game or two can be a drag. Two games could take up to two hours, and there's no guarantee that you'll get a win. There's not even a guarantee that you'll get a decent game. Game one might have a bottom lane that feeds, and game two you get a mid who never connects. You decide that you'll stick it out because you read this article, and game three you're stuck as ADC and you're really bad at it. You get 30 CS behind at 10 minutes, and you just throw up your hands. Some days are like that.

But if you can't get up and just play anyway, you'll never get the chance to experience anything different. When I first started playing ranked, I played pretty badly, and even in the games I won, I felt as if I had no control over the win. It was terrible, and I didn't keep playing.

It wasn't until Season 3 that I actually said, "I'm gonna actually try to play ranked this season, just to see how I do." I did really, really well! I went 8-2 in my placement games and continued to do really well afterward. I had pretty sizable win streaks, and even when I did poorly, I figured out what I did wrong.

If I had actually just buckled down and played more seriously in Season 2, I'd probably be a diamond level player right now. I've got no illusions about ever getting to the top level, but I think hitting Diamond V is probably reasonable for anyone with enough effort and time. As it stands, my current goal is just to get to Platinum V. I'm sure I can; it's just a question of whether I will. Don't blame your team, either. Or at least, don't blame your inability to climb the ladder on bad teams. If you're better than the average player in Silver I, you will eventually get your shot at Gold. This is just a mathematical fact. If the skill level of an average player in your league is 10 and your skill level is 11, you will win more games than you lose. If you win more than you lose, you'll eventually get promoted if you play enough games.

Some games are lost because of bad teammates, but some games are also won for good teammates or bad opponents. The key is averages. It is equally likely that any given player on a team is worse than the average. It is also equally likely that one is better. Sometimes the AFK will be on your team. Sometimes it will be on the enemy team. It happens, and it sucks either way, but when it goes your way, it's a free win. If it doesn't, it's a free loss. Honestly, it's less likely for an AFK to happen on your team because if you never AFK, there are only four people who might instead of five.

There is a bit of a question of impact. It used to be true that the support had the least game impact, and even if you were twice as good as everyone else in the game, it was hard to carry. As your skill level improves, your actual ability to carry a game will improve too. What I mean is that it is very hard to carry at low levels of play, even if you are a little better. As you improve, you learn to do what I call "leveraging advantages" or "distributing power." As your ability to do these things improves, your overall impact will increase. It's not enough to just win your lane; you have to turn your won lane into a won game.

That's a big subject that I can give two words of advice on: Buy wards.

The only consistent factor in your games is you. Change yourself for the better, and the wins will come.

We understand what it's like to climb the skill ladder in League of Legends. The Summoner's Guidebook teaches you the tools you need to get a competitive edge. Whether you're climbing the ranked ladder, playing Draft Dominion, or getting crushed by intermediate bots, every enemy has a weakness. And every Thursday, Patrick Mackey shows how you can improve improve on yours.
In this article: climbing-ladder, f2p, featured, free-to-play, improving, just-do-it, league, league-of-legends, lol, moba, opinion, pvp, ranked, ranked-play, riot, riot-games, summoners-guidebook, summoners-rift, the-summoners-guidebook
All products recommended by Engadget are selected by our editorial team, independent of our parent company. Some of our stories include affiliate links. If you buy something through one of these links, we may earn an affiliate commission.