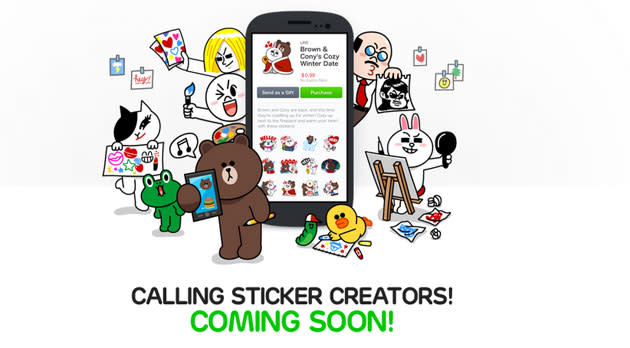 Rumors of yet another messaging app being sold pinned Naver's LINE app to Japanese phone carrier, SoftBank. The app maker denied the claim yesterday, and today (instead) announced that it's adding several new features, including LINE Creator Market, set to launch (at least in Japan) this April. Creator will allow artistic types to sell their own sticker creations on a dedicated market -- and split the earnings fifty-fifty. Images can be as large as 370 x 320, and you'll be able to register sets of up to 40 'stamps', selling each set for 100 yen -- likely to convert to around a dollar. LINE's messaging app has avoided ads, instead offering corporate accounts and paid-for sticker sets. The host site has now gone live with all the details and guidelines.

In this article: app, japan, line, messenger, mobilepostcross
All products recommended by Engadget are selected by our editorial team, independent of our parent company. Some of our stories include affiliate links. If you buy something through one of these links, we may earn an affiliate commission.